Jose “Girah” Macedo was considered to be the “Portuguese Poker Prodigy” not long ago. Everything has changed as of late though, and this prodigy has come out and admitted one of the biggest scandals in online poker since Justin Bonomo cheated at online poker. 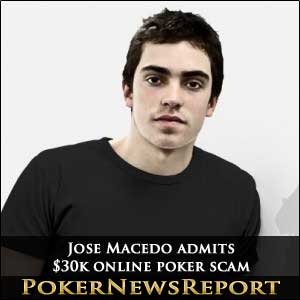 Jose “Girah” Macedo was considered to be the “Portuguese Poker Prodigy” not long ago.  Everything has changed as of late though, and this prodigy has come out and admitted one of the biggest scandals in online poker since Justin Bonomo cheated at online poker.

Macedo came out on the 2+2 poker forum and admitted what he had done, stating that he had been involved in scamming other high-stakes poker players who had trusted him and allowed him to “sweat” these players while he was actually playing against them on another account.  “Sweating” means that these other professional poker players had allowed Macedo to watch their online sessions via Skype, and gave him access to their hole cards.  He would then relay these cards to the opponent, which was either one of his close friends, or possibly even Macedo at times.

Macedo owned up to this scam 100%, but unfortunately it may not be enough in the end.  Because of this scam, he has already lost his deal with PokerStrategy, where he was an online poker coach and had more than 80 students who he helped online.  Macedo even “sweat” these players as well regularly, adding more interest into a bad situation.  As if it couldn’t get much worse, it wasn’t long ago that Lock Poker was in a bidding war to sign Macedo to a sponsorship contract, and now it has been rumored that he will be out as a Lock Poker pro, and banned from playing on any online poker sites under the Merge Network.

This isn’t the first issue that has come up with Macedo, as he won the Bluff Pro Challenge on Lock Poker, but ended up having the title stripped after it was revealed that a second player had used his account during the event.  It seems that the young poker pro had admitted to making mistakes in the past, but this mistake is worse than any others, and could be one thing that sticks to his name for the rest of his poker career.

Multiple people have pointed out some interesting facts about Macedo’s poker career, and questioned why he would do this.  Macedo has won over $2 million playing poker, and many fans, and players are asking why he would do such a scam for only $30k.  Girah said that the reasoning behind him doing this is because he felt bad for getting his friend into the world of online poker, because he had lost quite a bit of money, and that he just wanted to help him get it back.  But it is still quite shocking that someone would risk putting their name on the line to cheat for someone like this.

Two big named poker pros, Daniel “jungleman12” Cates and Haseem “Dogishead” Quesreshi were supposed to be visiting, and staying with Macedo in Portugal, but obviously their plans have changed as of late.  These two were close with him, and have decided to change their plans.  Macedo may have fooled quite a few people in the poker world to this point, but he is paying the price as no one seems to trust him anymore.