Jordan Cristos joined a roll-call of legends such as Dan Harrington and Doyle Brunson by taking down the WPT Legends of Poker at the Bicycle Casino last night. 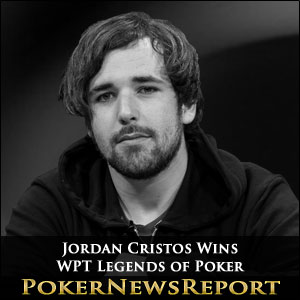 Although not such as familiar name as his victorious predecessors, Cristos – a regular on the Los Angeles live poker circuit – had to overcome a final table consisting of the irrepressible Phil Laak and the (almost) indestructible Dan Heimiller to claim the $613,355 first prize and earn the right to call himself a WPT Champion.

Throughout the previous four days of the WPT Legends of Poker Main Event, Cristos had been hovering around at the top of the chip counts; but it was not until he doubled-up against Alexandru Masek (Q♣ Q♠ > J♥ J♦) and bust Patrick Karschamroon in seventh (J♦ J♠ > A♠ Q♠) on the penultimate day of the event that he was considered a serious contender for the title.

Setting the Scene for the Legends of Poker Final Table

Jordan Christos entered the final table in third position – slightly above the average chip count, but he had to maintain the momentum from Tuesday night if he was to catch chip leaders Ryan Goindoo and Phil Laak.

Slow Start to the Final Table

Gordon nudged his stack over four million when taking a pot from Phil Laak with Ace-high in level 30 (blinds 50,000/100,000 – ante 15,000), but then the wheels fell off his WPT Legends challenge, as he first enabled Dan Heimiller to chip up to 2.5 million chips courtesy of a higher kicker on a board showing two pairs and then doubled up Phil Laak 10♣ 10♦ > K♦ K♥ after Laak rivered a Ten-high straight.

Gordon Gone then Laak is Lacking

Reduced to little more than two Big Blinds, Gordon twice doubled up at the beginning of Level 31 (blinds 60,000/120,000 – ante 20,000), but his recovery lasted just one level more. Moving all-in from the Big Blind with A♥ 10♠, John Gordon looked like he was going to double-up once again against Ryan Goindoo´s Q♠ 7♠, but the board produced the Q♣ on the flop and the 7♥ on the river to eliminate Gordon in sixth and move Goindoo into a 2 million chip lead ahead of Laak and Christos.

Jordan Cristos suddenly started becoming more active after a subdued start. Twice claiming the blinds and antes with all-in pre-flop shoves, and once forcing Dan Heimiller out of a pot with some post-flop aggression had put him into second place ahead of Phil Laak, and Christos took the chip lead when busting Laak in fifth in a straightforward Q♥ Q♠ > A♠ 8♣ race. Laak was bust in fifth, while Christos had amassed almost 9 million chips by the end of Level 32.

By rights, Dan Heimiller should not even have been at the final table, but an unlikely rivered Straight against Ryan Goindoo (A♠ 3♦ > A♣ 7♥) on Day 4 had kept his tournament hopes alive. Against the odds however, it was Heimiller who was to take the chip advantage into the heads-up after Ryan Goindoo had bust Alexandru Masek A♦ 2♥ > J♥ 9♥ (Masek paired his Jack on the flop, but Goindoo caught an Ace on the Turn) and then Heimiller bust Goindoo in two back-to-back hands.

In the first, Heimiller shoved all-in from the Small Blind with A♣ 8♠ and hit the 8♦ on the flop to double up against Goindoo´s A♠ 4♣ and in the very next hand the situation was reversed when Ryan Goindoo (5♣ 5♥) moved all-in from the Big Blind and Dan Heimiller snap-called with A♣ K♠. The board ran A♠ K♥ 3♥ / 10♥ to give Heimiller two pairs and Goindoo a potential flush draw in hearts, but the 4♦ on the river ended Ryan Goindoo´s participation in the WPT Legends of Poker and moved Dan Heimiller into the chip lead.

The deciding hand of the WPT Legends of Poker came almost two hours after the heads-up had started, and Heimiller once again made an aggressive move that he will be regretting this morning. With blinds now up to 150,000/300,000, Dan Heimiller shoved his last 3.75 million chips into the middle with K♥ 4♥. Jordan Christos called almost immediately and turned over A♥ 9♥. The board of 10♦ 9♣ 7♣ / Q♠ / 6♠ provided no glimmer of hope for Dan Heimiller, and Jordan Cristos had added his name to the list of WPT Legends of Poker winners.