Joni Jouhkimainen has recorded his first live tournament cash of 2012 for €56,860 by winning the main event at the second European Masters of Poker in Portugal. 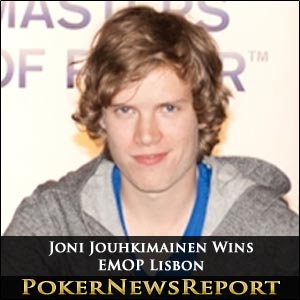 Finland’s Joni Jouhkimainen has recorded his first live tournament cash of 2012 for €56,860 by winning the €1,000+€100 main event at the second European Masters of Poker (EMOP) event in Portugal.

The young Finn outlasted 222 other players to lift the title at Lisbon’s Casino Estoril as part of the European Masters fourth season by beating fellow countryman Tomi Huuskonen in their heads-up encounter that left the runner-up with €34,110.

The nine-handed final table was set once Sweden’s Joakim Garlert was eliminated in 10th place for €4,460, with another Swede, Patric Mattsson, taking third place for €22,740, Irishman David Lappin picking up €13,820 for fourth and a third Swede in Martin Dahlqvist taking fifth for €10,700.

Once Mattsson hit the rail in third place on the fourth day of play of the main event, Jouhkimainen started his heads-up fight against Huuskonen with a chip advantage of 2.7 million to 1.9 million.

However, it took just half-an-hour for all those chips to be in the possession of Jouhkimainen when his 4♥ 3♥ beat out the pre-flop dominating starting hand of A♦ A♣ for Huuskonen.

The 6♠ turn elicited a 250,000 bet from Huuskonen, only for Jouhkimainen to move all-in. However, Huuskonen snap-called and we had a showdown.

Jouhkimainen’s 4♥ 3♥ had been filled up for a straight, while Huuskonen’s aces had not improved so giving the former the title.

Earlier in the day, local player Metelo hit the rail in ninth when moving all-in for 142,000, to be called by Mattsson on the button after getting a quick chip count.

David Metelo Out in Ninth

Metelo showed 5♠ 5♥, while the Swede placed A♦ 10♥ down on the table. However, any building suspense ended when the flop revealed 10♠ A♠ 10♦ to give Mattsson a full house.

Only runner-runner fives could save the Portuguese player, but that didn’t happen and Metelo was the first final table elimination.

Eighth place went to another home player in Ruivo after a battle of the blinds with Dahlqvist.

Small blind Dahlqvist moved all-in pre-flop and was called by big blind Ruivo for his last 253,000. The Swede showed 3♠ 3♦, while Ruivo turned over A♠ 7♦. However, it was almost over on the 3♣ K♠ 7♣ flop when Dahlqvist picked up a set. The 4♦ turn ended any hopes for a comeback and Ruivo was gone.

Kolodziejski was next to hit the rail in seventh place when moving all-in from under the gun for his last 217,000 chips. The third Portuguese player at the final table, Capucho, made the call from the cut-off seat to show A♥ 10♦ against his opponent’s A♦ 6♣.

The Pole was in big trouble and it just got worse on a flop of Q♣ 10♠ 3♥ to give Capucho middle pair. The 3♣ turn and 5♠ river were no help to Kolodziejski.

Capucho didn’t hang about much longer, though, as he was knocked out in sixth place by Huuskonen, who doubled-up with his victory from the last Portuguese player in the tournament to take his stack from just 115,000 under 10 minutes earlier to 1.3 million.

With both players all-in pre-flop, Capucho showed 4♠ 4♥ and Huuskonen tabled A♦ J♥ for what was essentially a coin-flip.

Mattsson then scored a double knockout by sending Irishman Lappin and his fellow Swede Dahlqvist to the rail in fourth and fifth respectively.

All three are all-in pre-flop, with short stack Dahlqvist placing his last 240,000 chips in the middle and Lappin sliding in his final 300,000.

Dahlqvist took the lead with two pair on a flop of 8♦ J♠ 7♦, but those three cards also handed Mattsson a gut-shot straight draw.

The 4♣ turn kept Dahlqvist ahead, but also gave Lappin a gutshot – only for the 10♣ on the river to give Mattsson trips for the double elimination.

Mattsson took third place however, when he moved all-in from the button for 900,000, to be called by Huuskonen.

Mattsson showed K♥ Q♠, but was behind the 8♠ 8♥ of Huuskonen. The 8♦ J♥ 7♦ gives the latter trip eights to leave the former drawing dead – and out of lick once more after finishing fourth for €17,304 at last year’s EMOP Lisbon.

The third stop on the EMOP arrives in Bulgaria on Monday, May 28, for seven days of action until Sunday, June 3, at the Crystal Crown Casino in Sunny Beach. Interestingly, the main event buy-in has been reduced by 30% to €700+€70, while a player’s starting stack has been increased by 30% to 26,000 chips.