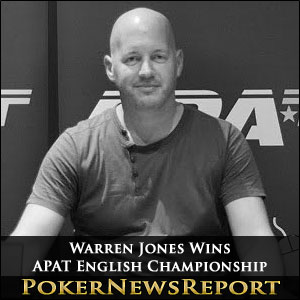 Jones had entered the second day of the £75.00 buy-in Welsh Amateur Poker Championship at The G Casino in Cardiff fourth in chips among the 28 survivors from Day 1, and he battled his way through Day 2 to arrive at the final table 10 Big Blinds behind chip leader Martin Foreman.

Short-stacked Gavin Priestly was involved in much of the early final table action. With blinds of 3,000/6,000 (ante 600), Priestly managed a quick double-up against Tom Feilding (A-J > A-3) and got two further pre-flop raises through uncontested.

Martin Foreman looked to be in a hurry to wrap proceedings up when he bust Gareth Johns in ninth (A-Q > J-J – Foreman´s Ace paired on the Turn), but he then lost a stack of his chips when doubling up Laura Rhoden (A-K > A-J) and Priestly (A-J > K-J) in quick succession.

Small Pockets no Good for Williams and Sharples

Pocket pairs were the undoing of Craig Williams and Adam Sharples, who departed in eighth and seventh respectively – Williams (pocket Threes) bust in eighth when Sean Priest K♠ Q♥ made a Straight on the Turn, and Adam Sharples (pocket Sixes) fell in seventh after Warren Jones´ K♠ J♠ had paired in the flop.

Martin Foreman regained the chip lead when rivering a Flush to cripple Tom Feilding and, despite doubling up twice, Feilding was next to go in sixth when running his Q-T (flopped top pair) into Warren Jones´ pocket Aces.

Laura Rhoden bust next in fifth in the most unfortunate of circumstances. Getting her last ~70,000 chips into the middle with 8-8, Laura looked good to double against Gavin Priestly´s 4-4 on the Flop and Turn of A-2-3 / K. However a Five was dealt on the River to complete Priestly´s Straight, and she was sent to the rail with much sympathy from those around the table.

Martin Foreman was also unfortunate to lose a substantial stack of his chips against Warren Jones´ 7♦ 2♦ before Jones finished the job with A♦ Q♣ > Q♠ 10♥ when both an Ace and a Ten were dealt on the flop. Jones moved into the chip lead over those two hands and then extended his advantage by taking down several uncontested pots against Sean Priest and Gavin Priestly as the blinds rose to 10,000/20,000 – ante 2,000.

Priest Takes out Priestly, but Cannot Overcome Jones the Steamroller

Sean Priest became the heads-up challenger to Warren Jones after his pocket Deuces held against Gavin Priestly´s K-J to cripple Priestly and his A-Q mastered Priestly´s K-J (again both players made a pair on the flop). However, despite starting the heads-up practically level on chips (900K Jones -v- 810K Priest), Jones raced to a 6:1 chip advantage by forcing Priestly out of valuable pots and taking the one hand that went to showdown K-10 > K-8.

With the prospect looming of being blinded out, Sean Priest (Q♠ 9♠) used the last of his chips to call another pre-flop shove by Warren Jones (Q♦ J♥). However, both players missed the board of K♣ 7♦ 4♣ / 7♣ / 10♣ and Jones had achieved history by becoming the first player to claim back-to-back victories in an APAT Main Event.