Newcastle online grinder Jonathon “whollyflush” Prested holds a significant chip advantage over the field after Day 1A of the UKIPT Bristol Main Event. 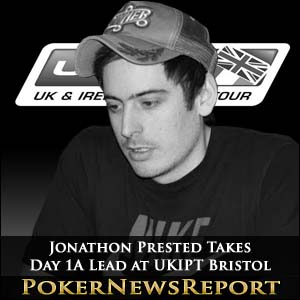 Newcastle online grinder Jonathon “whollyflush” Prested holds a significant chip advantage over the field after Day 1A of the UKIPT Bristol Main Event.

Prested – who admitted earlier this year that he was “not a massive fan of live poker” and “a mediocre MTT player at best”- finished the day with a chip stack of 121,300 chips; almost double his nearest rivals – Slovakian Michael Danko (69,600 chips) and Ireland´s Kevin Killeen (67,800) – as 109 of 235 players made it through to Saturday´s Day 2 at the Gala Harbourside Casino in Bristol.

Among those who will join Prested on Saturday are three players from Wednesday´s UKIPT Online Final Table – Chris Moorman, David Lenz and Ben Jenkins – although Chris Moorman will have to produce a minor miracle to make it through to Day 3, as he finished Day 1A with a chip stack of 9,600 chips. A fourth UKIPT Online Final Tabler – Daniel Smyth would have joined them had his A♠ 10♦ not run into the pocket sevens of Thomas Ward on the final hand of the day.

Others who will not be returning to the Main Event include Sam Holden, Jon Spinks and Roberto Romanello – who was eliminated in two hands before the end of Level 2 after his pocket Kings were busted by a player with trip Eights and then got all his chips in the middle with top pair and possible flush draw against a player who hit a set of Queens on the Turn. Romanello sadly (for him) did not bink the flush on the river.

Looking Ahead to UKIPT Bristol Day 1B

Despite an unfortunate conflict with the GUKPT Main Event up in Blackpool, organisers of the UKIPT in Bristol are anticipating a sell-out for Day 1B of the Main Event. PokerStars pros Liv Boeree, Vicky Coren, Christophe De Meulder and Mickey Petersen have already registered for the event, and we are also expecting UKIPT Online Main Event winner Wojtek Barzantny start his attempt to become the first ever winner of back-to-back UKIPT Main Events.