Jonathan Kalmar was a popular winner of Dusk till Dawn´s £150,000 Deepstack Event, although few people were still around to see it at 4.00am on Monday morning. 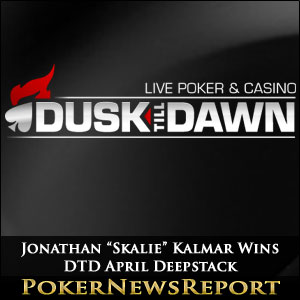 Jonathan Kalmar was a popular winner of Dusk till Dawn´s £150,000 Deepstack Event, although few people were still around to see it at 4.00am on Monday morning.

Dusk till Dawn´s £150,000 Deepstack Event is one of the most popular tournaments on the Nottingham club´s regular calendar of events and 280 players qualified online or ponied up the £550.00 buy-in to compete in this month´s tournament.

The event attracted a number of DTD and circuit regulars, and those who made it into the thirty-four player money bubble included Julian Thew, Matt Davenport, Tom Hall and Basharat Mahmood; however all of these players had departed by the time the field was reduced to a final ten, with GUKPT Stockton winner Neil Raine having a commanding advantage over his opponents.

Cummings Lucks Up into Lead as Raine Falls Down

The final table commenced with Mike Cummings taking over the at the top of the leaderboard, courtesy of a rivered full house against Simon Deadman, and then a rivered gutshot straight which eliminated Paul Coughlan in tenth place. Neil Raine´s fortunes by comparison went in the other direction – doubling up Chin Chai Koh A♣ 10♦ > 10♥ 9♥ and being four-bet out of a pot by Jonathan Kalmar.

Chips were exchanged for more than an hour before the next player was to leave the final table of the DTD April Deepstack – Hasmukh Khodiyara shoving all-in with A♦ K♦, but failing to connect with the board to improve past Mike Cummings pocket Queens – and Hasmukh Khodiyara was quickly joined by Simon Deadman, who had looked to double up with Ace-Jack against David Denny´s Ace-Ten until a Ten appeared on the Turn.

Chin Chai Koh was eventually to be eliminated from the DTD April Deepstack in seventh place after failing to bluff Neil Raine off of a one million chip pot, and David Denny quickly followed in sixth place after looking good to double with pocket Queens against Jonathan Kalmar´s Ace-King, until a King spiked on the River.

James Clarke can consider himself to be unlucky after getting all-in with a flopped top pair of tens, only to be eliminated in fifth by Jonathan Kalmar´s pocket Queens and, after Kalmar had bust Neil Raine in fourth Ace-Nine > Queen-Jack, the new chip leader had 8.5 million of the 14 million chips in play. He carried best part of that stack into the heads-up against Waheed Ashraf – who eliminated Mike Cummings in third K♦ Q♣ > 5♠ 3♠ to improve his own chip stack to 5.85 million chips.

Kalmar Wins with a Hand Normally Out of his Calling Range

Jonathan Kalmar started the heads-up on fire – raising 95% of the pre-flop action and only allowing Waheed Ashraf walks twice – both times Ashraf having Aces! Kalmar quickly improved his chip advantage to 10 million chips -v- 4 million chips and shortly before 4.00am it was all over.

Ashraf had plenty of outs to double up into the lead, but the 2♦ bricked on the River and Jonathan “Skalie” Kalmar had taken down the DTD April Deepstack for £33,500.