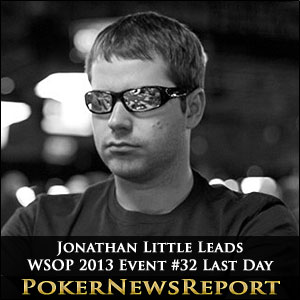 That’s a sharp drop from the 516 players who took to the felt for the start of event just yesterday evening, a sure sign of the competitiveness of those participating in the tournament. Jonathan Little will have the chip lead when the third and final play of play begins tomorrow, with a total of 1,290,000 chips to his name.

The 28-year-old WPT Season VI Player of the Year was able to get a 370,000 chip up to his stack minutes before the end of Day 2. It came after he won a huge hand that knocked out one-time WSOP Gold Bracelet winner Max Steinberg from the event.

In that hand, Little raised to 16,000 before the flop with J♣ 10♣ and Steinberg, who had 9♣ 9♦, responded by three betting to 56,000. Steinberg then went all in and was called by Little, who was behind before any cards were shown on the board.

That soon changed, however, when the 10♥ 2♦ 6♠ came out on the flop, giving Little a pair of Tens. The K♦ on the turn put Little further out in front and the 5♣ on the river got the job done, winning him the hand and eliminating Steinberg from the event in 15th spot.

Not far behind Little on the chip ladder is Allen Bari, who is just 99,000 chips behind him with a stack of 1,191,000. Like Little, Bari also got a boost to his stack in the late stages of the day after winning a hand that eliminated $1,000 Seniors No-Limit Hold’em Championship (Event #26) final table finisher James Miller from the event.

Four players saw the flop which knocked Miller out after they all initially called. That remained the same when the J♥ K♣ 10♥ flop came out, but the turn J♣ changed things considerably after a 57,000 bet from Vasile Buboi, which was then raised to 114,000 by Miller.

That reraise was called only by Bari, with Buboi and Dan Smith both folding their hands. The turn gave Bari a full house with his starting hand of J♦ 10♣, but he was happy to allow Miller to build the pot, ever confident that he had the strongest hand.

Miller, on the other hand, had K♦ Q♠ for a two pair, but that would not be enough to win the hand, especially after the unhelpful 5♠ was turned on the river. That knowledge was unknown to him at the time, however, and Miller went all in after all five cards came out on the board, which was called and won by Bari.

Buboi is the only other player left in the event who will begin the final day of play with a stack of over a million chips, with 1,100,000 to his name. The Californian has already beaten his previous best WSOP event finish, which was in the $1,000 No Limit Hold’em event back in 2007 when he came in 73rd place.

While he is guaranteed at least 14th place in this event, Buboi will surely be hoping to go all the way and have a WSOP Gold Bracelet around his wrist this time tomorrow. He is certainly in a good position to do just that.

He will face some stiff competition from accomplished poker pro Erick Lindgren, who is one of the 14 players who will be back tomorrow. The one time WSOP Gold Bracelet winner will be hoping to add a second one to his list of accomplishments when he returns tomorrow.

With a number of solid players remaining, Day 3 of Event #32 is set to be a competitive and entertaining one.