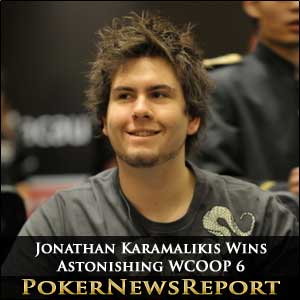 Anybody who has ever been busted out of the later stages of a valuable poker tournament will often reflect on what happened and how they could have played better/differently.

This morning the eight final table players who did not win the $215.00 NLHE Turbo Rebuy WCOOP Event 6 will just be scratching their heads at the incredible good fortune enjoyed by Australian poker pro Jonathan “Monster_Dong” Karamalikis.

It did not take long for 4kinghellll to lose his chip stack to FrankThomas8, and then for FrankThomas8 to pass his chip stack over to filfedra. In the next hand lotos64 (AQ) doubled up against gp18089 (A8) who then gained most of his lost chips back by busting out ShippityShip with a runner-runner flush.  Monster_Dong got involved in the action in the next hand – shoving all-in with J♦ 4♥ and being called by medmar holding A♠ 4♠. The board ran 9♥ 2♣ 6♠ / 10♦ / 5♦ enabling medmar´s Ace high to hold and reducing Monster_Dong to less than one big blind.

Karamalikis Has More Luck to Come

Down to four-handed, Karamalikis wrapped up the championship in just six hands – but not without a little more outrageous good fortune. First he took care of filfedra with pocket fives against the Czech player´s Ace-Deuce, an eight on the flop helped his A♥ 8♠ overcome lotos64´s A♦ 9♠ and, after just two hands of heads-up, medmar´s shove with K♣ 8♦ was called by Karamalikis holding A♣ 10♦, and the Australian´s luck held once more to claim the title and $179,569.13 first prize.

Here is how the final table eventually finished-