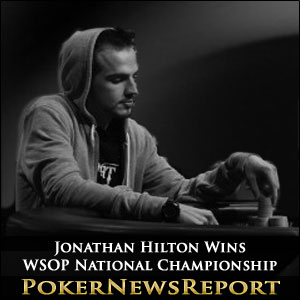 Known by some as the baby brother to the WSOP Main Event, the World Series of Poker National Championship concluded on Friday with Jonathan Hilton of Staten Island, NY emerging victorious. The win was good for $355,599 – not bad considering that young Mr. Hilton didn’t pay a dime to enter.

The invite only event, which kicked off the 2013 WSOP season, was comprised of 127 players, 100 of which either won a WSOP Circuit Main Event, or received an at-large entry. The other 27 entrants consisted of top 100 point earners in the 2011 and 2012 WSOP Player of the Year rankings, and were the only ones obligated to pony up the $10,000 entry fee. An additional one-million dollars in prize money was added to the pool, bringing the total amount of money up for grabs to $1,270,000.

Taking place at Harrah’s in New Orleans, the event marked the first time a gold bracelet was awarded on U.S soil outside of Las Vegas. But the real story here was Jonathan Hilton’s journey. After finishing 2nd to Dominik Nitsche in last year’s WSOP Event #59A, Hilton could have easily spent the next year wallowing in his own misfortune. But instead, he went on a magnificent run that saw him cash in eight Circuit events, including five final tables and an outright victory. Although his title didn’t come at a Main Event, Hilton performed so well that he was invited by the committee to participate in the National Championship. Suffice to say, he made good use of the opportunity.

At first it seemed as if no one was going to be eliminated. Every time a short stack got it in and was called, he managed a double-up. As the table grew increasingly tense, Jeremy Ausmus got tangled up in a pot with Robert Pannich. Ausmus raised in the cut-off with 66, and Pannich, who woke up with Jacks on the button, decided to play the way old men usually play Jacks and just call. The flop was favorable for Ausmus, (7-4-5 rainbow) who made a standard continuation bet that was essentially min-raised. After going into the tank, Ausmus shoved for his remaining chips and was snapped off. The Jacks held, and Ausmus, who began the day second in chips, was sent packing.

After that hand, the action sped up, mostly thanks to a three-way cooler hand that saw Panitch, Steinberg and Joe Tehan get it in pre-flop. Steinberg, behind with tens, cracked the Kings of Tehan, and sailed up the leaderboard. Tehan was left crippled and was subsequently eliminated on the next hand.

Meanwhile young Mr. Hilton was quietly accumulating chips, picking his spots wisely and avoiding all-in situations. And although he was at a 4:5 deficit when heads-up play began, a double-up placed the momentum decidedly in his favor.

All the chips got in the middle when Hilton flopped top two pair with KT of spades against Steinberg’s open-ender 9-7 off-suit. Remarkably, the best hand held after the turn and river bricked and Hilton was declared the victor.

When asked what the win meant to him, Hilton stating that winning is that much sweeter after you come really close, emphasizing that getting to a heads-up situation in a bracelet event is extremely difficult. Ironically, Hilton almost did not participate in the event as his mother is battling cancer and it was his parents 25th wedding anniversary. But like all good parents, Hilton’s folks wouldn’t allow him to miss the opportunity to take down the tournament and secure the first bracelet of his burgeoning career.

Good luck to you Jonathan. We’ll see you in Vegas.