Jonathan Duhamel’s GPI Player of the Year Lead Cut Down

Duhamel has seen his lead at the top of the GPI Player of the Year standings cut even further this week as Dan Smith closed to within 61.26 points. 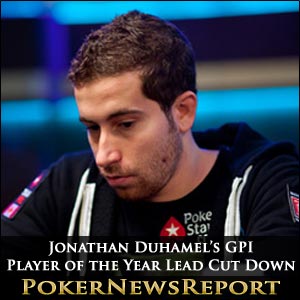 Jonathan Duhamel has seen his lead at the top of the Global Poker Index (GPI) Player of the Year standings cut even further this week as dynamic Dan Smith closed to within 61.26 points of the French-Canadian.

However, despite Smith’s final success from Monaco – in a Six-Max event – now being included on his PoY ranking score, he couldn’t quite overtake Duhamel, although the one-time World Series of Poker (WSOP) bracelet winner is now looking over his shoulder for the first time since award’s introduction 12 weeks ago.

Smith had climbed an incredible 153 places on the previous rankings list as a result of his first two wins at the Monte Carlo Bay Hotel & Resort, before moving up two more spots to now hold 534.42 points against Duhamel’s 595.68 – meaning the 2010 WSOP main event champion’s lead has continued to shrink following his last cash, a 13th place in the World Poker Tour (WPT) Bay 101 Shooting Stars $9,500 buy-in No-Limit Hold’em Championship Bounty, back on March 9.