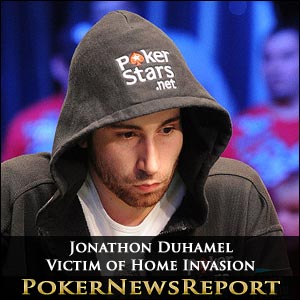 Jonathon Duhamel, the 2010 World Series of Poker (WSOP) Main Event champion, is recovering following treatment at a hospital after intruders stormed his home near Montreal, causing minor injuries to the poker pro.

Police in Longueuil said that the attackers rang the doorbell and forced their way inside when the door was opened. Although slightly roughed up in the attack, Duhamel called 9-1-1 following the miscreants’ departure and the police arrived moments later.

An agent of the Canadian pro, Philippe Jetté, told the Montreal Gazette, “Let’s say that getting out of bed will be particularly hard tomorrow and that his Christmas photos won’t be the prettiest. But Jonathan got out without serious injuries.”

Duhamel is a member of Team PokerStars and can be found playing on the no. 1 poker website under the name “johnduhamel.”

It is not known if the intruders targeted Duhamel specifically at his house in a Boucherville borough. The attack occurred in the morning at 9:15 a.m. The suspects have not, as of yet, been apprehended. Duhamel’s mother told The Canadian Press that her son is doing fine.

Jonathan, if you are reading this, the Poker News Report team wishes you all of the best. Take care.