French-Canadian star Jonathan Duhamel has started 2012 off with a bang at Paradise Island’s Atlantis Resort and Casino after breaking through the $10 million barrier in career winnings. 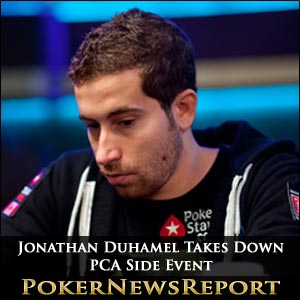 French-Canadian star Jonathan Duhamel has started 2012 off with a bang at Paradise Island’s Atlantis Resort and Casino after breaking through the $10 million barrier in career winnings.

The one-time World Series of Poker (WSOP) main event bracelet winner – who was badly beaten when robbers, including former girlfriend Bianca Rojas-Latraverse, entered his Quebec home on December 21 – will certainly be happy to forget about that incident, and has most definitely started this year off in great form.

The 24-year-old from Quebec outlasted 157 other players to pick up the $239,830 top prize after beating fellow Canadian Edward Kim in their heads-up battle.

But Duhamel had to face even stiffer opposition at the final table when overcoming players of the calibre of Team PokerStars Pros Pius Heinz – who exited in fifth for $45,980 after the German had won last year’s WSOP main event for $8,715,638 – and American star Jason Mercier.

Duhamel, who has now cashed for over $550,000 at this year’s PCA, will surely be aiming to up that healthy return when the $25,000 buy-in High Roller event kicks off later today.

It comes as no great surprise that the Canuck secured victory in this side event, though, as he has enjoyed a great series of results since winning the 2010 WSOP main event.

Top eight placings and payouts from the PCA $5,000 No-Limit 8-Max side event: