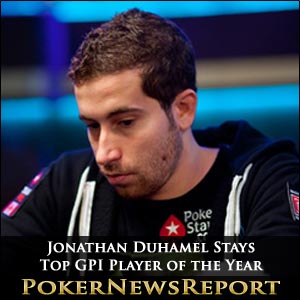 French-Canadian poker star Jonathan Duhamel has retained his place atop the Global Poker Index (GPI) Player of the Year leaderboard as the top six places remained static this week.

Duhamel – the World Series of Poker (WSOP) main event champion in 2010 – enjoyed a fantastic January with four top five finishes at the PokerStars Caribbean Adventure (PCA) on Paradise Island, including victory in the $5,000 buy-in No-Limit Hold’em Eight-Max event for $239,830.

While the one-time WSOP bracelet winner from Quebec leads the stationary top six on the rankings system that honours the player with the best set of results throughout a calendar year, Australian Oliver Speidel has jumped four places into seventh spot on 300.53 points.

Pittsburgh’s Jason Koon drops once place into eighth on 284.24 points, while Ruben Visser (258.03), of the Netherlands, and Englishman Stephen Chidwick (248.77) also fall one spot each into ninth and 10th respectively.

Finnish star Juha Helppi is the man to drop out of the top 10 into 11th place on 247.27 points, while another notable mover is Argentinian Team PokerStars Pro Leo Fernandez, who climbed 184 spots into 34th on 195.40.

Check out our GPI page for more information on the Global Poker Index.