This year’s ANZPT Queenstown Main Event is now over and Jonathan Bredin has been crowned its winner and given the NZ$93,700 (aroundUS$123,500) for his stellar play in the event. 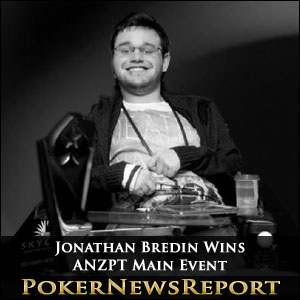 This year’s ANZPT Queenstown Main Event is now over and Jonathan Bredin has been crowned its winner and given the NZ$93,700 (aroundUS$123,500) for his stellar play in the event.

Bredin’s victory reads like a movie for those who followed the event. Bredin has cerebral palsy and uses a carer and an iPad to help his communication, but that proved no barrier in this tournament as shown by his success in the event.

But what makes his win even more movie-like is the fact that his final starting hand, the two cards that won him the event, are the exact same ones that are tattooed on his upper arm – K♣ K♠. It almost seemed like winning this tournament was destiny for Bredin.

Day 1a chip leader Michael Chon was the first player to be eliminated from the final table. Chon was eliminated by the eventual winner after his K♥ Q♦ outkicked Chon’s K♣ 7♥ before hitting a Two Pair on the turn for good measure.

Daniel Neilson was eliminated from the Main Event in eighth place, after losing a showdown against Daniel Laidlaw. Neilson went all in before the flop with J♦ 9♦ and was called by Laidlaw, who showed 8♣ 8♣.

Neilson went ahead on the J♠ 4♠ 2♣ flop, and it looked like he may have been on his way to doubling up and staying in the event. That all changed on the turn, however, when the 8♣ hit, which gave Laidlaw a set. The river did not help Neilson get the lead back, and he was knocked out of the tournament.

Next to go was Colin Carpenter, who was Bredin’s second scalp of the final table. Carpenter went all in before the flop with A♥ Q♦ and was called by Bredin, who was actually behind with Q♣ J♣.

Despite this, the winner managed to get ahead after the flop when the first three cards showed J♦ 3♣ Q♥. The 5♦ on the turn and the 3♦ on the river could not put Carpenter back ion the lead and he was eliminated from the Main Event in seventh spot.

Bredin then claimed his second straight scalp of the table after he eliminated Ricky Kroesen in sixth place. Kroesen went all in on the turn of the 7♣ Q♠ 2♠ 10♣ board with K♠ J♦, which gave him an open ended straight draw.

After a moment of thinking, Bredin called and showed A♠ A♣, which meant Kroesen needed to hit his straight if he was to stay in the event. That did not happen as the 3♥ was the card shown on the river, ending Kroesen’s time in the event.

Fifth place went to Jon-Pierre Narbey, who came off second best in a showdown against Raj Ramakrishnan. Narbey, who was short stacked, went all in with A♣ K♠ in an effort to double up,, and was called by Raj, who showed 3♠ 3♣.

Unfortunately for Narbey, the flop came 7♠ 3♥ 2♦, which gave Raj a set and left Narbey needed a near miracle to win the hand. To make matters worse, the 7♥ came on the turn to give Raj a full house and effectively end Narbey’s time in the tournament. The 10♦ finished the board and Narbey was officially eliminated.

The scalp did not help Ramakrishnan very much, however, as he was the next player to be eliminated from the Main Event. It came at the hands of Bredin after he won a showdown against Ramakrishnan.

Ramakrishnan moved all in with 5♦ 5♥ and was called by the eventual winner, who had A♠ K♣. Bredin hit an Ace on the flop after it came 3♥ 10♦ A♣, and kept the lead after the turn showed 9♣ and the river came 10♣, resulting in Ramakrishnan being knocked out of the event in fourth place.

Bredin then claimed yet another scalp at the final table as he knocked Chiu Lee out of the Main Event in third spot. Lee moved in before the flop with Q♣ 9♣ and was called by Bredin, who was ahead with A♦ K♦.

The flop came 10♣ J♥ 4♠, which kept Bredin ahead but gave Lee an open ended straight draw with two cards left on the board. The J♣ on the turn did not give Lee the straight he was after, but gave him a flush draw as well as a straight draw.

None of his draws came on the river, however, as the 10♠ was the final card shown on the board, much to the relief of Bredin, as Lee’s time in the event was over.

Lee’s elimination left Bredin and Laidlaw in heads-up play, with Bredin holding the chip lead when play began. Laidlaw’s experience on the felt came through early, however, and he clawed back by winning some big hands early on.

It appeared that it was destined to be Bredin’s day, however, and he eventually took back the chip lead before taking the victory. In the last hand of the tournament, Laidlaw went all in before the flop with A♦ Q♦ and was called by Bredin, who had K♠ K♣.

Bredin went further in the lead after the flop, which came 3♣ K♦ J♠. The turn came Q♠, but gave Laidlaw a pair but it still would not be enough to help win the hand. The 8♣ came on the river and Laidlaw was eliminated while Bredin was declared the winner of the ANZPT Queenstown Main Event.