Jonathan Aguiar gave Brandon Cantu a lesson in maturity both on and off the table as he won their delayed heads-up finale for the MixMax bracelet. 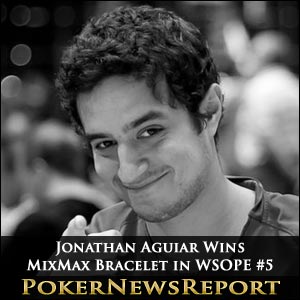 Jonathan Aguiar gave Brandon Cantu a lesson in maturity both on and off the table as he won their delayed heads-up finale for the MixMax bracelet.

The €10,450 buy-in mixed format event #5 which started last Wednesday was eventually concluded last night and, after a winner could not be determined during a six-hour battle on Friday, it took less than 45 minutes for Jonathan Aguiar to put Brandon Cantu on tilt, capture all his chips and win the MixMax bracelet along with the €258,047 first prize.

The MixMax format enables players to prove their skills in three different formats of NL Hold´em. Day 1 on Wednesday attracted 96 entries who played on a full table for eight one-hour levels. Those who survived the day, continued on Day 2 in a 6-Max format until just sixteen players remained. Those sixteen were randomly drawn into eight heads-up matches – with the players who had performed best during the first two days having a distinct chip advantage entering the final two-days.

Brandon Cantu came to have a substantially larger chip stack than anybody else entering the heads-up stage courtesy of an extraordinary hand during the 6-Max play on Day 2. Having been dealt A♣ A♦ he was gifted the good fortune of two well-stacked players getting their chips in the middle (Andy Frankenberger Q♠ Q♥ and Ognjen Sekularac K♠ K♥) and the board running clean.

Cantu´s 5:1 chip advantage over Phil Hellmuth enabled him to cruise to victory over the thirteen-time bracelet winner, but he struggled against Martin Jacobsen – only a rivered set of Deuces saving an increasing frantic Cantu from blowing a 4:1 chip advantage in the quarter-finals. Cantu was getting upset by his own inadequacies, and there was more letting off of steam when Roger Hairabedian started playing mind games during their semi-final – a match which Cantu emerged victorious from after a seven hour encounter.

Jonathan Aguiar had booked his place in the final relatively quietly. Quickly disposing of an ultra short-stacked Jason Mercier, Aguiar had to overcome a near 2:1 chip deficit to get past Marvin Rettenmaier in the quarter finals. With the hard work done, Aguiar´s victory over Faraz Jaka in the semi-final happened quickly courtesy of two straights in the early hands and the game was wrapped up within two hours when Aguiar´s K♣ K♥ held against Jaka´s 9♣ 9♥. However, as the bottom half of the heads-up draw had more short-stacked players in it, Aguiar was looking at a 1,770,500 chips -v- 1,110,500 deficit as the heads-up final began.

With the bigger chip stack, Cantu started as the aggressor but after initially extending his chip advantage, Aguiar pulled some back with a rivered diamond flush. At the beginning on Level 19 (blinds 4K/8K) Cantu tripped over Jacks on the flop and took full value of them to take his chip stack over 2 million, however that was the last time he was going to see a chip stack that large in front of him. Aguilar spent the next hour chipping away at Cantu´s stack and took the lead in one of the defining moments of the tournament.

On a flop of A♦ 8♦ 3♦, Cantu led for 75,000 chips only for Aguiar to raise to 270,000 chips. Cantu three-bet up to 540,000 chips to which Aguiar responded by announcing he was all-in. Cantu called and revealed K♦ 10♦ for the nuts flush. Aguiar turned over 8♠ 8♥ for the middle set and needed an Ace and Eight or a Three to save his tournament live. The J♣ on the turn was of no assistance, but the 3♥ spiked on the river – giving Aguiar a Full House and a commanding chip advantage over Cantu.

A visibly shaken Cantu started hurling insults at Aguiar. Comments such as You’ve played SO bad and somehow you’re still winning, flew out of Cantu as he tried to get back into contention, and the situation became tenser when the game was stopped at 5.00am on Saturday evening because the casino was closing. Cantu, who had got some momentum going and taken a narrow lead wanted to resume again on Sunday but, as both players were entered into Day 1B of the WSOPE Main Event – and Jonathan Aguiar did not want to miss the early levels – it was decided to re-start the conclusion to WSOPE when both players were eliminated from the Main Event.

With neither player enjoying a successful Main Event, they were seated back around the table on Monday night – Cantu having a 1,520,000 -v- 1,361,000 chip advantage over Aguiar. Aguiar grabbed the advantage back by squeezing Cantu out of a 190,000 chip pot and then hitting an Ace on the turn and an Eight on the River to match the A♣ 8♣ in his hand. Cantu muttered something about Aguiar enjoying hitting the river, while Aguiar retorted Did Hellmuth turn you into a calling station?

The intensity of the heads-up finale rose further still when, two hands later, Aguiar rivered two pair to crack Cantu´s K♠ K♦ and it was soon all over – Cantu madly shoving his last 600,000 chips into the middle with 2♣ 2♦ and being snap-called by Aguilar who was holding A♣ K♣. The flop of A♥ 10♥ 8♣ put Aguiar firmly in control and, unlike in his heads-up against Martin Jacobsen, there was no Deuce on the river to save Brandon Cantu on this occasion and the MixMax title was Aguiars.

Brandon Cantu immediately went into a major tizzy – declaring to anybody that would listen that the ****ing WSOP robbed me of a ****ing bracelet – a reference to the decision not to continue the finale on Sunday. Meanwhile Jonathan Aguiar acknowledged the support his friends had given him and said that it had been a “once in a lifetime experience” to be playing for a bracelet in a heads-up that had lasted for so long and had seen so many swings. To win the bracelet against such a talented field he said was a “dream come true”.

96 players entered the tournament in pursuit of the bracelet and €258,047 first prize, with those getting through to the last sixteen heads-up stage cashing in the event. Those counting their money this morning are:-