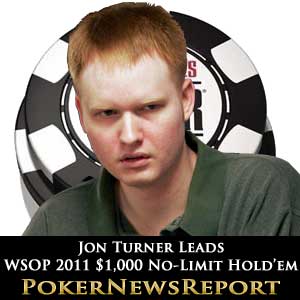 Not too far behind, after 563 players exited on day two, are Kyle Speake, from Kansas, on 573,000 and Texan Hunter Frey (535,000), while some other big names still remain in with a shout, including Ana Marquez, Valerie Cross, Jordan Young, John Eames, Albert Kim, Jonathan Duhamel and Young Phan.

Turner was back in the bunch until close to the end of play, when he secured a good-sized pot to take the chip lead on 613,000. Of course, he added another 136,000 chips before the day was out, but it was the following hand that moved him top.

Then came the Kh on the turn and Turner’s adversary bet 60,500, before Turner – who made a quick chip count calculation – called.

His opponent was impressed, saying: “You’re good”, before showing A-8 for an ace high. However, Turner showed 10s-10c to take the pot down and move into the chip lead, which he increased before play was halted.

It was all action on day two as bust-outs arrived at regular intervals, with poor Nick Gibson the unfortunate bubble boy as 423 players made the money.