British player Jon Spinks will take the largest chip stack into day two of the $1,500 No-Limit Hold’em event this evening at the World Series of Poker (WSOP) of 2011 in Las Vegas. 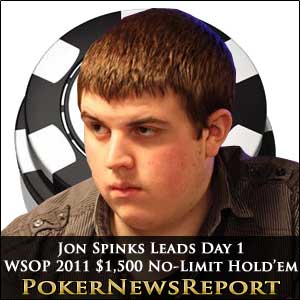 British player Jon Spinks will take the largest chip stack into day two of the $1,500 No-Limit Hold’em event #38 this evening at the World Series of Poker (WSOP) of 2011 in Las Vegas.

Just 298 players remain in contention after the first day’s play, but they will all be playing catch-up on the Englishman when event No.38 resumes in the Amazon Room tonight.

There were more than a few very significant hands played out late in the day, including when Houston’s Weisner called an under-the-gun opponent’s 2,000 raise.

The small blind then went all-in to the tune of 12,200, the original raiser chucked his cards, and Weisner called with Ah-10h to see her opponent’s As-Qd dominate.

Weisner was in really bad shape – and it only got worse as the board showed 8s-Js-Qs-10c-Ks to leave her Broadway straight second to a spade flush. The Full Tilt Poker pro dropped down to 38,000 following that loss but managed to recover somewhat to now sit on 55,600.

Quebec’s Duhamel was also involved in a couple of big hands. In the first, Duhamel held Ac-Qc to dominate his opponent’s Ad-8c. However, the flop showed 3h-3d-8h to leave the 23-year-old facing a demoralising bad beat – and that’s how it played out as the Ah turn and 10d river left him with a lesser two-pair to drop down to a miserly 5,500 chips.

But he more than doubled-up soon after when shoving his stack in pre-flop while holding As-10c. Duhamel received one call as his opponent revealed Ks-10d.

This time, though, Duhamel’s lead held up on a 2d-6h-Jc-3s-2s board to take him to 11,500 in chips – giving him an outside chance of claiming the gold bracelet.

Just 82 players will have to be eliminated on day two to take us to the cash, with $3,018 the minimum, so we could be in for a thrilling start to tonight’s play.