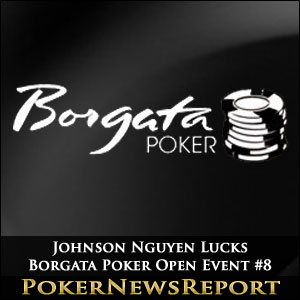 Johnson Nguyen enjoyed more than his fair share of good fortune on the card tables of the Borgata Casino yesterday – surviving several tricky scenarios to stay alive in Event #8 of the Borgata Poker Open and hitting a “wonder card” to take control of the heads-up against Andrew Jeffrey.

129 players had returned for Day 2 of the Deeper Stack NL Hold´em Event #8 and – with only 100 of them due to cash – play was exceedingly tight to begin with. The bubble burst when Adam Seltzer hit an Ace on the River to bust his opponent´s pocket Sixes and thereafter the action speeded up.

Nguyen Gets it All-In

Having started Day 2 with a chip stack of double the average, Johnson Nguyen was not afraid to throw his chips around; however it was a huge pot against Day 1A chip leader John DiBella which enabled him to take a commanding lead in the event.

With blinds at 8,000/16,000 (ante 2,000), DiBella (8-9s) raised from the button to 32,000 chips. Nguyen (K-9o) in the Big Blind made the call and both players saw the flop of 9-9-x. DiBella and Nguyen both made Trip Nines but checked the flop. However, after a Ten was dealt on the Turn, both players went crazy and the pot grew to 1.2 million chips with DiBella at risk. The River blanked for DiBella and Nguyen stacked up to 2.6 million chips.

With the prospect of a final table appearance, Nguyen – whose only previously recorded live cash was for $695 in a WSOP Circuit event – slowed down a little, but he could not resist calling Cary Marshall´s (pocket Kings) post-flop shove with QJ on a Queen High board. The Jack on the Turn gave Nguyen two pairs and Marshall was out in 18th.

However, Nguyen did not take his chip advantage to the final table. That honour was reserved for Andrew Jeffrey, who sailed through the players finishing 14th to 11th to lead the final table.

Short Stacks Topple as Maccaroni is Cheesed Off

John Caltagirone´s K-Q failed to improve past Frank Bonacci´s A-K, and he was sent to the cashier´s desk in ninth; shortly followed by Pierce McKellar (A-7s) when Tony Sinishtaj was again dealt pocket Kings. Johnson Nguyen enjoyed a further stroke of luck with the elimination of Matt Maccaroni in seventh – hitting a three-outer on the River to make two pairs after both players held the top pair, but Maccaroni had the better kicker. The hand put Nguyen back in the chip lead.

Nguyen Still Has All the Luck

As the blinds increased to 50,000/100,000 (ante – 10,000) Tony Sinishtaj chipped up into second place when his K-Q paired on the flop to see off Aleksander Sirota´s pocket Nines, but then Andrew Jeffrey halted Sinishtaj´s rise up the leaderboard when his A♠ J♠ rivered the nut flush for an important double-up.

A double-up by Frank Bonacci against Johnson Nguyen (Kings > Tens) enabled the overnight chip leader to also claw his way back into contention, but Nguyen´s luck was still running hot and he came from behind against Tony Sinishtaj to hit two pairs on the Turn against Sinishtaj´s top pair top kicker.

Having witnessed what was going on around him, maybe Joe Grodowski could have chosen a better time to get all-in with his pocket Aces against Johnson Nguyen´s pocket Fours. The inevitable Four appeared on the flop and Grodowski was sent to the rail in fourth.

Grodowski was shortly followed by Frank Bonacci, whose A-6 failed to improve passed Andrew Jeffrey´s pocket Kings to be eliminated in third, and the final pairing for the heads-up was the two chip leaders when the final table had started:-

The Best (of the Luck) was Still to Come

The pivotal hand in the heads-up occurred when, on a board of 7-5-2, Nguyen (6-4) shoved all-in. Jeffrey made the call with pocket Kings, but the Eight appeared on the River to double-up Nguyen and cripple Jeffrey. The tournament was over a few hands later, and Nguyen admitted afterwards “if I’m going to see the flop and I hit a draw, I’m going to go with it. I felt like it was going to come because I’ve been sucking out all night.”

A fairly accurate description of his win!