Sammy Farha and Johnny Chan were handed the chance to gain revenge for main event defeats during the WSOP 2011 Grudge Matches yesterday. 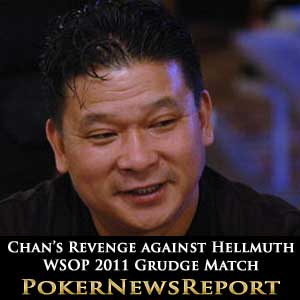 Sammy Farha and Johnny Chan were handed the chance to gain revenge for main event defeats during the WSOP 2011 Grudge Matches yesterday.

Johnny Chan has two bracelets from previous WSOP main events, but he is probably best remembered for the one that got away when a then 24-year-old Phil Hellmuth defeated him to lift the WSOP 1989 title and halt the Chinese star’s chance of a third straight victory following successes in 1987 and 1988.

Lebanon’s Farha, meanwhile, has never lifted the main event and was hoping to gain some measure of revenge for his 2003 loss to Chris Moneymaker.

However, while Chan did succeed, Farha was left disappointed again in the Rio All-Suite Hotel & Casino in Las Vegas.

Hellmuth – who has a record 11 WSOP bracelets – became the youngest main event champion 22 years ago when his pocket nines beat Chan’s suited A-7.

But 53-year-old Chan wasn’t to be denied last night after moving into an early lead – after both had started with 890,000 in tournament chips – to eventually emerge as the winner in a 120-minute encounter, which was approximately 40 minutes longer than expected as Wisconsin native Hellmuth picked up winning cards on four all-in bets when behind.

However, with the blinds at 25,000 and 50,000, the match did come to a conclusion when Hellmuth moved all-in with Ks-10c to be called by chip leader Chan, who held pocket eights. The flop showed 3h-5s-9s and, as the turn came Jc and the river showed 9c, Chan had won with his pair – with one of the winner’s fans shouting out: “Give him your bracelet!”

A thrilled Chan, with 10 WSOP bracelets in total, said that he hoped “everyone enjoyed it – that’s what it’s about”, before adding that “it doesn’t matter to me, winning or losing, if everyone has a good time”, while also pointing out he and Hellmuth “played our hearts out at the table”.

Chan, who picked up $25,000 for winning as Hellmuth left with $10,000, had an “enjoyable” time, but was surprised to see the match “last for more than two hours as we really didn’t have much chips to play with”.

Farha and American Moneymaker, meanwhile, played a best-of-three match-up, with the Atlanta player recording a 2-1 success. The agreed format saw the first game begin with the identical chip stacks of eight years back, the second was reversed and the third began with the players even.

The first clash didn’t pan out as well as 51-year-old Farha had planned. Unable to claw back the opening chip deficit, his Ah-10s lost out to Moneymaker’s Ac-8d.

The second round was up and down for both players, but Farha got his opponent when his As-7d saw off the 8s-8c on Moneymaker following a 6d-7h-6c flop.

So, it was on to the final round, when both played far more aggressively. Moneymaker, while on the button, remained strong to raise to 200,000, but Farha went all-in for 1,500,000 – only for the American 35-year-old to call.

Moneymaker showed Kc-Jh against Farha’s Kh-10c to dominate. The flop showed 7d-3c-7h to give Farha a few extra outs that could split the pot. When the turn came 6h, more than a few railbirds began shouting for a 10. However, it was the 2d that appeared on the river and Farha was done.

Chan faces Erik Seidel, from Vegas, in the concluding Grudge Match in a repeat of their 1988 encounter that was famously relived in poker movie Rounders.

Meanwhile, the $5,000 no-limit Hold’em event also kicked off yesterday with a record 865 players registered, although only 243 remain after the first day’s play.

Britain’s Gavin Cochrane has the chip lead on 175,500, but is closely followed by Victor Ramdin on 174,700 as the likes of Dave Sands, Kevin Saul, Brandon Cantu and Jordan Morgan also made the top 10.

Some big names did, however, crash out early, with Tom Dwan, Jason Mercier, Vanessa Selbst and Daniel Negreanu all hitting the rail.