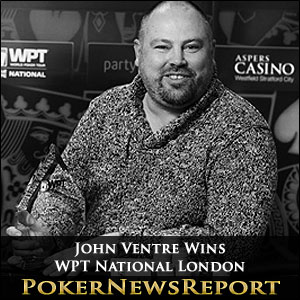 The WPT National Main Event in London concluded on Sunday after five days of action at the Asper´s Casino in Stratford. 335 players chipped up the £200.00 buy-in or qualified via Party Poker to play in the tournament, which was structured in such a way that players could enter on each of the three opening flights and take their accumulated chip stacks into Day 2.

Consequently there were 510 entries into the event – with fifty players firing three bullets and entering on all three Day 1s – which created a prize pool of £91,800, with £20,250 set aside for the winner. After a busy Day 2, thirteen players returned to Asper´s Casino on Sunday to contest the climax of the tournament.

After four hours of play, the final table was set – headed by John Ventre – and, as the blinds quickly rose, it took only 2½ hours for the remaining nine players to be reduced to just two – John Ventre taking a substantial chip lead into the heads up against Mohammed Suhail after maintaining his chip lead throughout the final table.

By the time the concluding hand was played, Ventre had increased his advantage to 8.7 million chips -v- 1.5 million chips. Blinds were 250,000/500,000 when Suhail four-bet shoved pre-flop with King-Three and Ventre snap-called with Ace-Queen. The flop of Ace-Three-Queen put Ventre firmly in control, and Suhail could not spike the Three he needed to extend his life in the WPTN London Main Event.

Organisers Delighted with the Response

John Scanlon, Head of Aspers Poker, was delighted with the turn-out for the event. He said

A massive thank you to all the players that came to support and make the event a triumph for everyone involved. To give players the opportunity to become a WPTN champion for just £200 is amazing. Congratulations to John Ventre our champion and it’s a nice bonus that our first winner is a regular cash player in the casino. Hope to see a sell out for the next event in Milton Keynes.

It’s been a great first stop of the new Party Poker WPT National UK tour, to achieve 510 entries is fantastic. The feedback we have received from the players has been very positive; everyone has had such a great event experience.

The next WPT National event on the UK tour takes place between 19th and 22nd December at the Casino MK – the largest casino outside of London – in the Xscape Complex in Milton Keynes. Satellites to the WPTN Milton Keynes Main Event are currently running on Party Poker.