John “DaGunMan” O´Shea won the first ever Boylepoker International Poker Open Event to be held in Galway – the first of five stops on the IPO Tour this year. 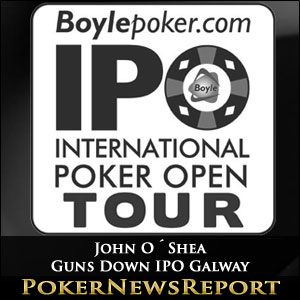 John “DaGunMan” O´Shea won the first ever Boylepoker International Poker Open Event to be held in Galway – the first of five stops on the IPO Tour this year.

The International Poker Open (IPO) has traditionally been a one-off event held each year in Dublin and, once upon a time, held the record for the largest poker tournament to be held outside the US. Last year Boylepoker experimented with taking the IPO outside of Dublin and hosted an event at the Aspers Casino in Stratford; which organisers felt went well enough to justify a five-stop “IPO Tour” in 2014.

This weekend 606 players descended on the Radisson Blu Hotel in Galway for the €230.00 buy-in Main Event and, after three opening flights of fourteen levels, 176 players made it through to Sunday´s Day 2. The 72-player money bubble burst when Mark Strahan moved all-in with A♣ Q♣ and received a call from Paul King (A♦ K♣). The flop of 8♣ K♥ K♦ was about as decisive as you could get, and the remaining players were each assured of a €400.00 min-cash.

Play concluded on Sunday when the eight-handed final table was set – Trevor Considine (K♥ Q♠) failing to connect with the board and being eliminated by Paulius Venkauskas´ 7♠ 7♣ – and going into the final day, Boylesports-sponsored John O´Shea had a massive advantage with almost half the chips in play:

There was an incredible start to Sunday´s final table, as the first eight shoves all resulted in short-stacked players doubling up. John O´Shea was unsurprisingly the biggest loser in the melee, with the Lithuanian pair of Petras Stulpinas and Paulius Venkauskas being the biggest gainers – chipping up into second and third respectively.

However, the double ups could not continue for ever, and Yutaka Mitsuishi was the first player to depart the IPO Galway final table – running his A♣ 5♠ into John O´Shea´s 5♣ 5♦ and failing to find the Ace he needed to stay alive. Another spell of double-ups started; during which Paulius Venkauskas was the biggest loser – twice doubling up Damien Feeney before the last of his chips went in with 6♣ 5♦ against Brendan Byrne´s A♣ K♦, and both players missing the board.

Prior to the final table getting underway, John O´Shea had written in his final table bio ““Tomorrow will be the biggest car crash in Galway since Chris Dowling got mangled by Rory Rees Brennan” (a reference to the Party Poker Irish Poker Championship in 2009), but he had to rely on some remarkable good fortune to have a part in the quick spell of eliminations that followed.

Brendan Byrne had been reduced to his last handful of chips when Patrick Humphreys had doubled-up against him A♠ K♦ > A♦ 5♦, and the last of Byrne´s chips were taken by Petra Stuplinas A♣ K♥ > Q♠ 8♥. The Lithuanian then bust out Patrick Humphreys Q♥ Q♣ > A♦ 8♥, before busting out himself in the biggest hand of the tournament so far:

Stulpinas open-shoved 5♣ 5♦ from the button and was called by John O´Shea in the Big Blind (A♥ J♦). The A♥ in the window paired O´Shea´s hand, but was followed by the 5♠ and 6♦ on the flop – giving Stulpinas a set. The Turn of 6♠ left the Lithuanian a 90% favourite to win the hand, but the A♦ spiked on the River to give O´Shea a better Full House and eliminate Stulpinas in fourth place.

Feeney Goes in Third, but Heads-Up is No Walkover

Incredibly Geoff Healy doubled up three times in a row and took a slight chip advantage when his A♥ 8♥ mastered O´Shea´s A♦ 2♣ – at which point a deal was agreed that saw both players lock up €17,280, with €3,960 and the IPO trophy to play for. It turned out to be a fantastic deal for Healy, as soon after he was crippled J♦ J♣ > A♠ 4♦ and the writing was on the wall for the FX trader from Galway.

A double up in the next hand only left Healy on life support (the blinds were now 150K/300K with a 30K ante), and the last of his chips went in with 4♠ 4♥ against John O´Shea´s 10♦ 10♠. The flop of 7♦ 2♣ 3♦ offered Healy the prospect of a straight draw, but the 10♣ on the Turn ended any chance of another miraculous comeback and the J♣ on the River was purely academic.

Dates for Your Diary