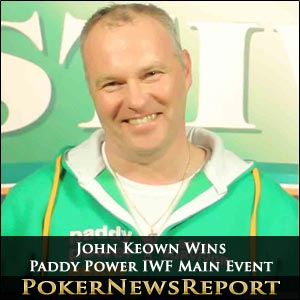 The popular Irishman claimed the title, winner´s cheque of €100,000 and a €20,000 bonus for being the last surviving player in the event who had qualified online at Paddy Power Poker. John overcame a field of 395 poker players during three days of competition – the last of which started with 12 players divided between two tables.

At the start of play, blinds were 8,000/16,000, with a 1,500 ante, and it was no surprise to see some of the short stacks have a pop at doubling up early on. Irish Open champion Niall Smyth doubled up in one of the first hands of the day – his 6♠ 6♣ holding on against Michael Mazilu´s A♠ 10♥ – but Keith Maguire was not to be so fortunate – choosing the wrong moment to run his A♠ 6♦ into the A♣ 7♠ of Noel O´Brien. Niall Smyth´s second attempted double went badly wrong when he ran his pocket Sevens into the Aces of Noel O´Brien, and the final table of nine was set after Robert Jones was eliminated in tenth by Chris Dowling.

As the final nine sat down, Noel O´Brien had a substantial lead of 370,000 chips over John Keown, who in turn was over 500,000 chips clear of third placed Ville Salmi. However, it was Chris Dowling who got his head in front shortly after the dinner break by eliminating both Colm Hayes in 9th and Ville Salmi in 8th. Michael Mazilu got some of the chips back he lost against Niall Smyth when his pocket tens held on to eliminate Damien Quinlivan and, after paying off a shove by Matej Kokalj, Noel O´Brien got back on top of the leaderboard  by eliminating Brian Warren in sixth with Aces versus A♠ K♠.

As the blinds increased to 20,000/40,000 with a 3,000 ante, Michael Mazilu was the shortest stacked of the remaining five players and was indeed the first to get his chips in the middle. Sadly, his Q♥ J♦ failed to improve and was dominated by John Keown´s A♦ K♥. John then took the chip lead from Chris Dowling when doubling up with Q♦ Q♥ against Dowling´s A♠ 7♥. Noel O´Brien eliminated Matej Kokalj when hitting Q♣ on the river to pair the Q♥ in his hand and beat Kokalj´s Ace high gamble, and then took out Chris Dowling (A♣ 6♠) when his K♠ J♠ flopped two pairs.

Incredibly, it was the “Boatman Hand” of Q♠ 7♠ which ultimately sealed the Heads-Up. Ironically it was the exact same hand that had helped Noel to the top of the leaderboard on the previous evening to bust Philip Peters, but this time it was dealt to John Keown. John had captured the chip lead with trip Fours in one of the first hands of the heads up, but Noel had levelled the chip stacks when coming from behind to beat John´s A♣ 8♠ with A♠ 3♥. For a while the two players kept a tight poker game until Noel moved all-in on a flop of 3♠ 4♠ 5♥. John called and the two layers showed their cards

The potential turned into a game turning hand when the 9♠ was dealt on the turn to give John the flush and, with only 6 million chips in the game, John now controlled 5 million of them. Noel managed to double up once, but in the next hand shoved with K♣ 6♣ and found nothing on the board to help overcome John´s A♦ 5♣.

Forty players cashed in the Paddy Power Poker Irish Winter Festival Main Event. Those who picked up their cheques on the final day were:-