The 2010 International Poker Open (IPO) has finally come to a close for the year after three days of poker action that saw 1,293 players whittled down to just one, John Gray – an Irish player who is a Merchant Navy Officer… 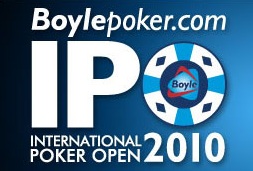 The International Poker Open (IPO) has finally come to a close for the year after three days of poker action that saw 1,293 players whittled down to just one, John Gray.

The action was great to watch, even from the very beginning of the tournament, with players given deep stacks at the start of the tournament meaning that betting was never going to be a case of small wagers.

The majority of the action took place within the first two days of the tournament, seeing the players field reduced from the 1,293 entrants down to the final 9 players, setting up a great contest for the final day.

44 year old Irish man Eddie Landy lead the players into the final table, holding almost 3 million in chips with fellow countryman Gavin Flynn taking the accolade of holding the second highest chip stack as they took their seats at the table.

With chips heavily stacked in the two named players favour, spectators thought that it was going to become a two horse race as the pair would use their strong wealth of chips to infringe pressure on the likes of Englishman Daniel Ward and online poker player Craig Borrer who were both taking their seat on the final day with less than 600,000 a piece.

That wasn’t the case, there were some huge pots with all in shouts galore, oversized betting and all the drama that comes with that sort of play, exciting to watch to say the very least.

With the table trading blow for blow, it wasn’t too long before we started to see some of the final 9 heading to the rails, until we were left with three.

Aidan Connelly, Eddie Landy and John Gray all outlasting their opponents to take the action through to a three way encounter.

The high intensity action didn’t slow down at this point either, with the bets flowing and the all in calls more than slipping off the tongue of the trio.

It was Connelly that was finally caught out, seeing an ace on the river leave him having to join the large crowd of spectating fans who were gripped to the action.

The play became a little less high paced and saw Landy and Gray looking to exposure each others weaknesses until the final hand finally came round.

Gray found pocket Jacks in his hole cards and found himself up against Landy who was looking to hit a flush draw but when the river card fell to the table, it was Landy that was out of luck and Gray was crowned the winner of the tournament.

The BoylePoker.com sponsored tournament offered a small €180 + €20 buy-in but with the number of players who took part in the action, Gray managed to take home €50,600.