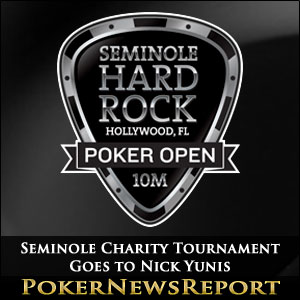 In August 2013, the Seminole Hard Rock Casino in Florida hosted the first ever live poker tournament with a $10 million guarantee. Missouri poker player Blair Hinkle defeated Justin Bonomo in a classic heads-up to capture the $1,745,245 first prize; and, due to all the publicity the event received, the tournament prompted both the WSOP and WPT to introduce headline grabbing guarantees on some of their feature events (the WSOP guaranteed the winner of this year´s Main Event a $10 million prize; while the WPT guaranteed its World Championship for $5 million).

Unfortunately the second edition of the Seminole Hard Rock Poker Open has not been such a great success. Only 1,499 entries were received over the three Day 1s of this year´s $5,300 buy-in event – leaving the Seminole with a $2.5 million overlay. 478 players made it through the three opening flights, and returned to the Seminole Hard Rock Casino yesterday for Day 2 of the event – with the primary goal being to survive the 300-player bubble.

Day 2 began with the 478 players having an average chip stack of 94,000 chips and facing blinds of 1,000/2,000 (ante 300). Several tough table draws found Matt Glantz playing on the same table as Doug Polk and Huck Seed, while Simon Deadman had Greg Merson and Chino Reem for company. More than 100 players bust during the first couple of levels – including former WSOP Champions Joe Cada and Ryan Riess – and the bubble burst during Level 16 (blinds 1,500/3,000 – ante 500) in the first hand-for-hand pot.

The unfortunate bubble boy was Joe Weissman, who got the last of his chips in with Q♠ Q♥ and got a call from Bao Nguyen, who was holding K♥ 10♦. Weissman looked in good shape to double-up with his pair of Queens, but the flop of 7♦ 5♦ 2♦ and Turn of 9♦ gave Nguyen a ten-high flush, and Weissman was sent to the rail in 301st place. With everybody finishing between 201st place and 300th place receiving the same amount of money ($7,483), there followed an incredible volume of eliminations so that, by the dinner break at the end of Level 19, less than 150 players remained.

Looking Ahead to Day 3 of the SHRPO

Four more levels were played until the close of play on Day 2, during which time former November Niner John Dolan (2010) soared to the head of the chip counts with more than 3 million chips. Other notable players to progress into Day 3 include “One Drop” winner Daniel Colman (1,237,000 chips), “Bubble Girl” in the Seminole Charity Tournament Natasha Barbour (437,000 chips), and last year´s winner of this event Blair Hinkle (312,000 chips) – who had come into Day 2 of the tournament with just 69,400 chips.

When the 62 players return to the Seminole Hard Rock Casino later today they will be starting Level 24 (blinds 10,000/20,000 – ante 3,000). The length of the levels will be extended to 90 minutes (from 60 minutes) and nine levels of action are scheduled to take place (although this may be reduced due to the lower than anticipated entry. The next player out is assured of a $29,244 payday, while the prize money up top is $1,446,710. Those in the best positions to make a drive for the first prize include: