John Dibella survived 7 tough days of the $10,000 buy-in main event at the PokerStars Caribbean Adventure to emerge victorious from his heads-up with Kyle Julius. 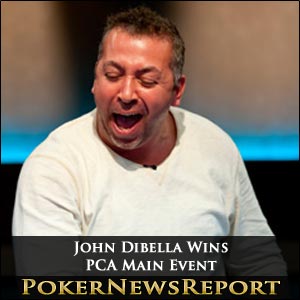 Arizona-based Dibella and Julius, of Illinois, agreed a deal so each player received $1.5 million once they met head-to-head, leaving an additional $275,000 for the winner.

Dibella – a stock trader from New York State’s Westchester County – will be thrilled with his victory from a 1,072-strong field as his previous best cash had been for just $16,000 after finishing in 60th place at the 2008 PCA $7,800 buy-in main event.

In fact, he said: “I am overwhelmed. It feels so surreal, and I can’t believe it’s happening – I’m sure it will hit me tomorrow.”

Dibella had started in fifth place once the final table had been reached, but took the title and $1,775,000 after defeating Julius.

Earlier in the final day, former Team PokerStars Pro Visser – who had begun the final table fourth in chips – found it hard going with the leading stacks to his left and the small stacks to his right.

The Dutchman was unable to overcome this huge disadvantage and hit the rail first in eighth place.

Visser was hammered down when Newfoundland’s Drover, in the big blind, went all-in for approximately nine big blinds while holding A♥ Q♦.

Big blind Visser called with A♣ J♣ and, while he did flop a flush draw, he could not improve his hand and lost out.

He was hitting the rail soon after when his hold cards of 6♣ 6♠ lost out in a race to the A♥ Q♦ of Julius after a queen arrived on the flop.

Canuck Bernstein was eliminated in seventh place after three-bet shoving his 4♠ 4♣ into the A♦ A♣ of Dibella.

A third quick elimination arrived when Maryland’s Gregg – who had collected $1.7 million for his runner-up finish in the same event from 2009 when losing out to Canadian Poorya Nazari – hit the rail in sixth.

Having started the final table with the smallest stack, Gregg did his best to improve his chances of victory, but eventually fell when his A♠ 10♠ ran into the A♦ Q♣ of sole female Liu.

The turn had given Gregg a flush draw, but that was as good as it got as he hit the rail.

Canada’s Drover showed incredible skill and determination to battle back from holding just three big blinds with a quartet of double-ups, but faltered when his K♥ J♠ was unable to beat Jaka’s 6♣ 6♠.

Drover three-bet all-in and was called by Jaka. No help arrived for Drover, leaving us with just four survivors as the dinner break arrived.

Toronto’s Liu was out immediately after the break. On the button, she went all-in with Ad-7d on the first hand following their meals and received a call from big blind Jaka.

Jaka showed A♥ 6♦ to be way behind, but got lucky as the board read A♣ 6♥ 3♥ 5♦ 2♦ to give him two pair and eliminate Liu in fourth place. Still, Liu can content herself with the best ever finish by a woman in the PCA main event.

However, Jaka could not stay in contention long enough to make it to a heads-up encounter when he again encountered Julius in what became a defining moment in the tournament.

Following a pre-flop raising battle against Julius, Jaka five-bet all-in his K♥ J♦, only to find himself dominated by the A♦ K♣ of smaller stack Julius. The flop of A♣ K♠ 7♦ 9♥ 8♥ secured a double-up for Julius.

Jaka stayed alive after doubling-up on the very next hand, but then came another momentous hand that resulted in Dibella taking over as chip leader.

Big blind Julius had A♣ A♥ and played it cool with a call. Jaka must have picked up on something as he quickly folded to leave Dibell and Julius to battle for this pot.

The flop came down 8♦ 7♦ 3♦ and Dibella check-called with his trip sevens before making a full house when the 8♥ arrived on the turn.

Dibella check-raised and that saw him and Julius chuck all their chips into the middle. But the river gave Julius no help and Dibella was back in control.

The came the heads-up fight between Dibella and Julius that ultimately left the former as champion after they had reached a deal.