Joey Weissman led from the front to secure his first gold bracelet at the World Series of Poker by taking down the $2,500 buy-in No-Limit Hold’em event #46. 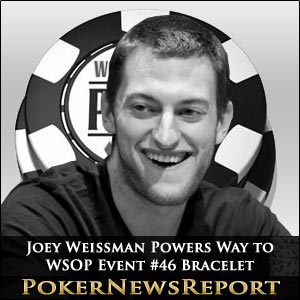 Joey Weissman led from the front to secure his first gold bracelet at the World Series of Poker by taking down the $2,500 buy-in No-Limit Hold’em event #46.

The 24-year-old American started the third day at the Rio All-Suite Hotel & Casino as chip leader and eventually earned his WSOP bling, as well as $694,609, by outlasting the 26 players who began Day 3.

New York State’s Weissman – who held more than half of the for most of the nine-hour final table – easily surpassed his previous biggest cash, $35,110 for seventh place at the $5,000 buy-in No-Limit Hold’em main event in the Festa Al Lago last October, when defeating Frenchman Jeremy Quehen in their heads-up battle.

The final hand of the tournament saw Florida-based Weissman raise to 240,000 and Nice’s Quehen make the call. The flop came down Q♦ 5♥ 3♣ and Quehen bet 350,000, with a slightly surprised Weissman making the call. The 7♥ turn card saw Quehen continue his aggression with a 800,000 bet, while Weissman – who appeared nervous – riffled some chips while considering his move.

Eventually, Weissman made the call to see the last card fall as the J♥. Quehen said: Two million and shoved four stacks of green 25,000 chips into the middle of the felt.

The edgy Weissman looked ready to fold but then shocked the gathered railbirds by announcing that he was all-in. Quehen quickly called, only for Weissman to throw in the A♥ Q♥ for an ace-high flush to send the room crazy!

The new champion was engulfed by friends and family, as well as his special canine supporter, ‘Revis’, while one his mates shouted: Tonight we are getting fu**ed up!, almost certainly insuring that Weissman won’t be seen at any tables in the Rio today.

Vanessa Selbst Out in 24th

The 10-handed unofficial final table was reached when New Jersey’s Stephen Reynolds exited in 11th place for $38,716, while Sioux City’s William Reynolds – having been crippled earlier – hit the rail in 10th, also for $38,716.

Now down to the final nine, play slowed down somewhat as the majority of pots were won by stealing the blinds and antes. However, the rising blinds started to tell and a quartet of players – Konstantin Puchkov (ninth for $49,245), Joshua Pedraza (eighth for $63,686), Michael Gagliano (seventh for $83,428) and Joe Gualtieri (sixth for $110,775) – hit the rail to give us the last five.

Weissman stayed aggressive, taking part in virtually every hand, while the shorter stacks managed the occasional double-up during the early stages of five-handed play. But Tennessee’s Bradley Lipsey did eventually hit the rail in fifth place for $149,162 when his queens were beaten by the aces of Weissman.

Brito appeared to be pushing for the winner’s spot during the three-player battle after shutting down Quehen and Weissman with three-bet pre-flop action – and forced the eventual champion to fold once more with an all-in shove after the flop, before getting involved in yet another huge pot that would see him eliminated.

Brito certainly had the momentum when again three-betting pre-flop. And, once more, it was Weissman who engaged him by shoving all-in. Brito made the call to put his tournament life at risk, although he was ahead with the 9♣ 9♦ against Weissman’s A♣ J♥.

The Q♥ 4♣ 3♦ flop changed nothing, but the J♣ turn gave Weissman the leading pair. He, however, stayed impassive ahead of the 7♦ river that confirmed Weissman would face off against Quehen with a healthy chip lead of 8.4 million to 3.6 million.

It should be noted how dignified Weissman was following Brito’s elimination, making sure to approach the defeated Brazilian to offer some consolation, before then heading over to his rail to savour the moment and even give ‘Revis’ a low paw slap in celebration!

However, the Frenchman proved a resistant opponent, staying close to his original heads-up stack for the majority of his three-hour battle with Weissman. In fact, Quehen did manage to double-up to close the gap at one point, and even took the chip lead just a couple of hands later with a flush.

But, just as it looked like the European player might snatch the bracelet from under Weissman’s nose, the American doubled-up to put the chip counts pretty well level for the first time – and then moved onwards to collect the most sought-after piece of jewellery in poker as the runner-up pocketed $429,535.

Additionally, Puchkov moved one place closer to emulating fellow Russian Nikolay Evdakov’s record of 10 cashes at a series with his ninth place finish in this event. In fact, Moscow’s Puchkov is now just one in-the-money finish behind the late Evdakov, who notched his terrific 10 back in 2008.

The one-time bracelet winner added another $49,245 to his series cashes to take his total prize money in 2012 to $130,287, although he does have two challengers in the race to break Evdakov’s record.

Puchkov had moved one cash clear of Terrence Chan and Joe Tehan with this latest score, but the duo then added in-the-money finishes of their own in the $1,500 buy-in Pot-Limit Omaha Hi-Lo Split-8 or Better event #47, with Vancouver’s Chan exiting in 117th place for $2,509 and Vegas’ Tehan picking up $3,288 for 79th.

This is certainly a compelling race – and one we at Poker News Report will continue to watch as it develops.