Joeri Zandvliet, winner of the UK and Ireland Poker Tour Main Event in Manchester in 2010, has repeated his success in the Dublin 2011 equivalent. 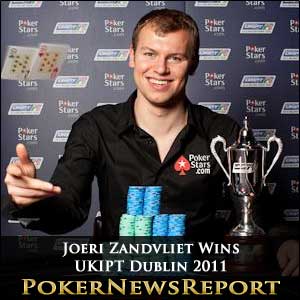 Joeri Zandvliet, winner of the UK and Ireland Poker Tour (UKIPT) Main Event in Manchester in 2010, has repeated his success in the Dublin 2011 equivalent.

In a spectacular finale to the tournament, the Dutch PokerStars qualifier perfectly read a bluff by last year´s winner Max Silver to take command of two thirds of the chips in play, and use them to defeat the last two remaining players – American Chuck Fabian and Hungarian Robert Csire.

Joeri Zandvliet started the final day of the UKIPT Dublin like an express train and never ran out of steam. Eliminating David Docherty within the hour when his 8♥ 8♠ held up against Docherty´s A♥ J♣, Zandvliet twice three-bet Max Silver out of hands pre-flop before extending his lead on a paired board against Robert Csire. After the first break, the flying Dutchman used his chips to three-bet players out of ever-increasing blinds and only Max Silver was able to compete with Zandvliet – severely damaging Noel O´Brian´s aspirations with a rivered Q♣ to pair with his Q♠ and spike O´Brian´s pocket Tens.

The Luck of the Irish Runs Dry

Rory Curtis was the first of a trio of Irish players to bust in quick succession – his K♣ Q♥ failing to catch on the board and coming second to Robert Csire´s A♥ 10♦. Silver (Q♠ 10♦) was the catalyst for Noel O´Brian´s ultimate demise in sixth – calling O´Brian´s K♣ 2♣ shove and spiking two pair on a flop of 10♥ J♦ Q♥ – and overnight leader Jason Tompkins had his resistance cracked by Chuck Fabian – Fabian´s A♠ K♠ besting Tompkins´ A♥ 6♥ even before the K♣ arrived on the river.

Max Silver´s elimination of Noel O´Brian, and a big pot taken from Joeri Zandvliet, had balanced the chip lead between the Englishman and the Dutchman. However, Silver was to push his luck once too often. Raising Zandvliet´s under-the-gun bet, Silver (small blind) responded to being four-bet by shoving his stack of 3,015,000 into the middle. Zandvliet just had him covered with 3,100,000 and turned over A♦ K♦. Silver, who had staked his tournament life on 8♥ 4♥ only had a glimmer of hope left after seeing the J♦7♦J♠ flop and 9♥ turn (a non-diamond 10 would give him the gutshot straight), but the river card was the 6♦, giving Zandvliet the Ace flush and more than two-thirds of the chips in play.

Despite his commanding chip advantage, Joeri Zandvliet was unable to boss the table as he had done in the previous levels. Both Robert Csire and Chuck Fabian had put plenty of pressure on Zandvliet, and started to make inroads into his chip stack. Eventually Zandvliet (A♥ 9♥) called one of Csire´s shoves and must have been horrified when the Hungarian turned over A♠ Q♦. With half the chips in play on the table, Zandvliet looked like losing the chip lead – although given some help by the flop of J♥ K♥ J♣. Looking for a 9 or a heart, the 7♣ on the river helped neither man, but the 9♦ sent a devastated Csire to the rail and Zandvliet into the heads-up with an 8.3 million to 2.3 million chip advantage over Chuck Fabian.

“This is Going to Make Boring TV”

That was the comment made during the heads-up play by Chuck Fabian after an hour of very little action. The few chips that had been exchanged had gone the way of the American, but the finale of the UKIPT Dublin Main Event was soon to spark into life.

From the button Chuck Fabian raised to 300,000, Joeri Zandvliet moved all-in from the big blind and Chuck Fabian called all-in for 2,350,000. On their backs:

Fabian was dominating Zandvliet and looking good for a double up that would get him back in the heads-up match. The flop of 8♣4♠7♣ kept him in the lead but gave Zandvliet seven outs for his second UKIPT title.

The 4♦ also gave Zandvliet some chop outs, the river was the 5♦ to give Zandvliet the winning hand, his second UKIPT title, the trophy and a cheque for €83,500.