Joe Tehan in Charge After Day 1 of WSOP Event #6 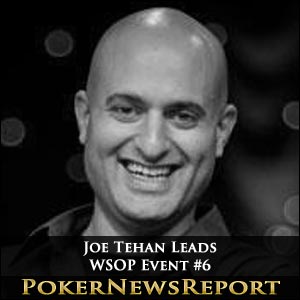 While this is the first mixed-max tournament to be staged at the WSOP in Vegas, he event actually made its debut at last year’s WSOP Europe in Cannes, when Florida’s Michael ‘The Grinder’ Mizrachi picked up $448,861 by beating Vancouver’s Shawn Buchanan heads-up to secure the split-format bracelet.

Back to the event – and just 112 players remain after an incredible opening day of this four-day tournament in the Rio All-Suite Hotel & Casino that will see $480,564 go to the winner, with 44th place picking up $9,503.

But all those returning for Day 2 in the Brasilia Room will be chasing Tehan, who has already accumulated more than $3.7 million in live event earnings, while also securing 21 WSOP cashes and two final tables at the world-famous poker series.

Most significantly, though, is that $306,800 of his winnings came just last December when he finished third in the $20,000 buy-in Mixed-Max No-Limit Hold’Em Epic Poker League (EPL) main event in The Palms, Vegas – proving once again that there really in no substitute for experience.

The 31-year-old gathered his large stack following two crucial hands – the first being when he knocked out Chicago’s Mohsin Charania with kings against queens, while the second saw him eliminate New Yorker Andy Frankenberger and Vegas’ Ryan Schmidt after flopping a flush.

There was also an amazing Table #5 – now being referred to as ‘The Table of Death’, of course – that formed in the Gold Section of the Brasilia Room early in the day that included Erik Seidel, Chris Moorman, JC Tran, Jason Mercier and Yevgeniy Timoshenko!

Players came and went, but the quality remained – although it was young Russian Kirill Kruglov who shone brightest, eliminating English Lock Pro Elite member Moorman. Eight-time WSOP champ Phil Ivey then joined the table, but his nines failed to hold against the A♣ 9♣ of his opponent after an ace arrived on the flop and the American superstar was eliminated.

It certainly wasn’t a great day for some of the biggest names in poker, with Phil Hellmuth also crashing out early. The 11-time WSOP champion found pocket aces, but was eliminated by the jacks of Illinois’ Hiren ‘Sunny’ Patel when another jack came on the flop.

Canadian star Daniel Negreanu might not have been eliminated, but – as he was multi-tabling between this tournament and the $1,500 buy-in Pot-Limit Hold’em event #5, where he will start the final day in sixth place of nine – maybe he wasn’t quite as focused as he should have been.

In fact, the four-time bracelet winner kept running back into the Brasilia when there was a break in the action in event #5, which was held in the Amazon Room, although he did manage to survive on 8,400 chips in 112th place. Still, it’s unlikely we’ll see him play this event with a final table to be played in the Pot-Limit tournament.

Phil Collins Has Stomach For Survival

The Vegas-based pro had downed numerous drinks while watching friend Brent Hanks secure his first WSOP bracelet – in the $1,500 buy-in No-Limit Hold’em event #2 – but was somehow capable of lasting the day, even if he looked like death warmed up!

Florida’s Tony Cousineau holds more than twice as many chips as his nearest rival, Rogerio Sousa, after Day 1 of the $1,500 buy-in Seven-Card Stud event #7.

Cousineau, of Daytona Beach, ended the day on 93,500, while second placed Sousa, from North Carolina, bagged up with 41,000 chips as 110 players made it through to Day 2 from the 367 who started in the Amazon Room of the Rio.

All will be chasing the $126,363 winner’s cheque from the $495,450 prize pool, but Boston’s Matt Hawrilenko won’t be among the challengers as he was the first to hit the rail after two hours of play.