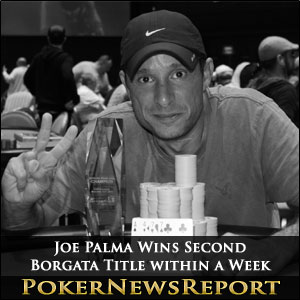 Prior to this week, Joe Palma´s best result in a Borgata Poker Open event was an 18th place finish for $8,497 in the Winter Open at the start of the year. Now the poker player from Bensalem in Philadelphia has won two titles within the space of seven days.

Fifteen players returned yesterday for Day 2 of Event #12 from the 112 that entered. Each of the players was assured of a min-cash after the money bubble had burst on the previous evening, and it did not take long to arrive at an “unofficial” final table of ten(!); which was set when Ming “Joy” Reslock eliminated her husband – three times Borgata trophy winner Chris – in eleventh place.

The “official” final table of six was set when David Rosenau put the last of his chips in with split Kings during a round of Seven Card Stud and Allen Kessler, Frank Alger and Joe Palma checked down the pot. Palma won the hand with two pairs, but this was only good enough to chip him up into fourth place behind Ming Reslock.

Alger Down and Out in Sixth as Everybody Gets Short

Frank Alger was the first player to leave the final table after doubling up Allen Kessler in the FL Hold´em round (JJ > AK) and then losing the last of his chips to Ming Reslock in a Full House > Full House hand during the subsequent Omaha Hi/Lo round.

Ming Reslock chipped up to 605,000 chips with the elimination of Alger but, with no players leaving the game during the Razz or Stud disciplines, by the time the five remaining players were ready to play FL Hold´em again the Big Bet was up to 25,000/50,000 and Sal Pipitone (who had chipped up during the Stud Hi round at Reslock´s expense) was chip leader with 471,000 chips – not even ten big blinds!

With such big blinds, the chip lead was changing every hand.  Norm Michalek took control of the tournament when Ming Reslock missed her low draw during the next round of Omaha Hi /Lo, and Reslock was eliminated in fifth in the very next hand by Joe Palma.

However, Michalek´s reign at the top of the chip counts was in a perilous position and, after seeing his stack deteriorate during the next circuit of games, he was bust in fourth when Palma hit a set of Eights in the Seven Card Stud round.

Although Joe Palma´s chip stack was now worth no more than 15 Big Bets, he had more than half the chips in play, and he increased his advantage when hitting a seventh street Flush during the Stud Hi/Lo rounds (blinds 40,000/80,000) to eliminate Allen Kessler in third and take a 1.4 million -v- 300,000 chip advantage into the heads-up against Sal Pipitone.

Sal Pipitone nursed his stacked of four big bets through the following FL Hold´em round, but the game was all over in the following round of Omaha Hi/Lo when Joe Palma´s hand of A♦ 7♥ 4♦ 7♣ was good enough to win both the high hand and the low hand.

After his victory, Palma said that getting a second trophy within a week was “pretty cool” and he intends to take the weekend off (from playing poker) to be fresh for the WPT Borgata Poker Open Main Event which starts on Monday.