Former World Series of Poker (WSOP) main event champion Joe Hachem dream comes true to hear that the WSOP will be making a trip Down Under. 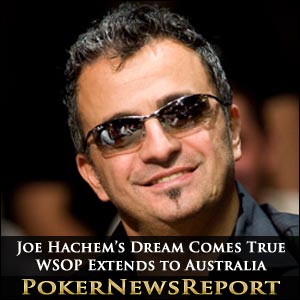 Former World Series of Poker (WSOP) main event champion Joe Hachem says it is a “dream come true” to hear that the WSOP will be making a trip Down Under come next April after it was announced that the WSOP Asia-Pacific (WSOP APAC) will offer five bracelet events in Melbourne in 2013.

With the WSOP already reaching out into Europe, it appears that the series’ organisers are aiming to conquer the world, with executive director Ty Stewart saying: Our goal is to establish the worldwide grand slam of poker and use our platform to elevate the game through a series of major championships.

The Crown Casino in the Australian city will host the 12-day festival of poker from April 4 to 15 next year, with all five tournaments expected to be televised at a later date throughout the world on ESPN.

Schedule Information Still to be Announced

While exact details of the five events are still to be revealed – with an announcement on the schedule expected over the next few months – a multi-year deal has been signed with the Crown as the WSOP makes its first steps into a new market since debuting at London’s The Casino at the Empire back in September of 2007 for the inaugural WSOP Europe.

But the initial announcement has already sparked excitement among many pros – particularly those based in the region, including 2005 WSOP main event champion Hachem.

The Lebanon-born Aussie is most definitely enthused by this extension of the world-famous series as the Asian Poker Tour (APT) ambassador has decided to focus on playing tournaments closer to home.

Well, you can’t get much closer than your home city, so it’s likely the Melbourne pro will be lining up for at least a few of the five events as poker becomes even more popular in Australia.

In fact, the 46-year-old – who pocketed $7.5 million for that WSOP success – reckons it’s thrilling to think the World Series of Poker is coming to Australian soil.

The former Team PokerStars Pro expects an exciting few weeks in Victoria, pointing out that he knows first-hand what a life-changing moment winning the WSOP gold bracelet was to him, while also stressing that his victory served as a catalyst for the growth of poker in Australia and Asia.

Of course, that has been borne out by the success of the APT and Asia Pacific Poker Tour (APPT), with Hachem also saying he can’t wait for next April when it will be a dream come true to host a worldwide poker event such as this at Crown.

Stewart, meanwhile, suggested that, following on from the WSOP’s continued growth – with this year’s event being the 43rd annual staging of the series – and the WSOP Europe set for long-term success after five years, the timing was right to turn our attention to the dynamic poker scene in Asia and Australia.

He was also keen to point out that, given the Crown’s success with the Aussie Millions… we couldn’t ask for a better partner than Crown to establish the Asia-Pacific’s definitive poker festival.

Of course, the Crown’s chief executive officer Greg Hawkins was also delighted to reveal the news, saying that this exciting partnership brings together two industry leaders – and two strong brands – to create a premier poker event in this region.

Hawkins continued by adding that the Crown’s agreement with the WSOP firmly aligns with our objective of attracting the very best local and international players as they vie for a coveted WSOP bracelet.

Also, with being incredibly proud of the success achieved during the 15 years of the Aussie Millions Poker Championship, Hawkins is looking forward to adding the WSOP Asia-Pacific to our poker calendar in April, 2013, while also attracting even more international visitors to Australia and Crown Melbourne.

Of course, we at Poker News Report (PNR) will keep you updated on any developments relating to the WSOP APAC, so remember to bookmark PNR for ease of return.