Joe Cassidy has collected his first World Series of Poker (WSOP) gold bracelet by defeating Scotty Nguyen in what was a classic heads-up battle in Las Vegas. 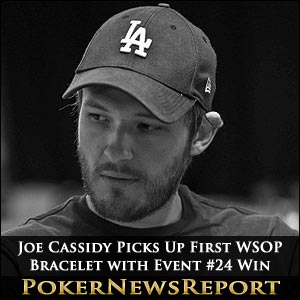 Joe Cassidy has collected his first World Series of Poker (WSOP) gold bracelet by defeating Scotty Nguyen in what was a classic heads-up battle in Las Vegas.

The $5,000 buy-in Omaha Hi-Lo Split 8-or-Better event #24 kicked off four days previously, with 256 starters all aiming to pocket the $294,777 first prize, but it was Cassidy who emerged victorious after beating his fellow Vegas-based pro in the Rio All-Suite Hotel & Casino.

Numerous big-name players signed up for this tournament, including eight-time bracelet winner Phil Ivey. However, he fell two places short of bagging his ninth bracelet when exiting in third place for $136,046, leaving Cassidy and Nguyen to battle it out in their head-to-head.

Such was the incredible play in this event that an extra day was added to allow both finalists the chance to rest up before bringing this tournament to a close, although Cassidy started this fourth day with a huge chip advantage of three million to Nguyen’s 845,000.

Cassidy was hopeful of closing out the heads-up quickly, but found five-time bracelet winner Nguyen in no mood to capitulate. The underdog began well, taking his stack above the one million mark after only a few hands, while the first big pot also went to Nguyen.

On the button, Nguyen limped in, only for Cassidy to raise. Nguyen called to see a flop of Q♠ 6♥ 5♣, prompting Cassidy to bet and Nguyen to call. The K♣ turn saw Cassidy check-raise after Nguyen made a 100,000 bet. Nguyen made the call to see the 2♣ river, with Cassidy check-calling this time.

Nguyen revealed 3♦ 4♣ Q♦ J♥ for a straight as well as a low to take down the pot, although Cassidy still had about 2.3 million chips remaining – and soon had Nguyen reduced to only 220,000 chips.

The limits were at 60,000/120,000 now and less than half-an-hour later Nguyen had added another million chips to his growing stack. With Cassidy frustrated, having seemed to be on the brink of success when Nguyen was extremely short, the latter hit a high of 1,710,000 during the third level of the final day’s play.

However, that was as good as it got for Nguyen as Cassidy recovered to open up a huge lead once again. A succession of small pot successes for Cassidy chopped Nguyen down to only a few big blinds, while even a double-up with runner-runner couldn’t stave of his elimination for long.

The A♣ Q♥ 8♣ flop gave Cassidy top pair and Nguyen bottom pair, with both having the same low draw. But the J♥ turn then gave Nguyen two pair, although Cassidy had up a Broadway draw, which got there when the 10♥ came on the river to secure his first WSOP bracelet.