UK poker player Jiri Sladkovsky produced a stunning finish to Day 3 of the GukPT Goliath in Coventry to take a massive chip advantage to the final table. 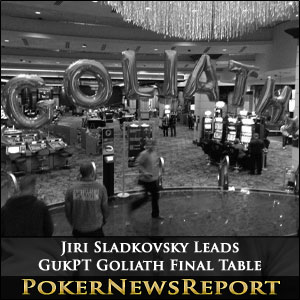 UK poker player Jiri Sladkovsky produced a stunning finish to Day 3 of the GukPT Goliath in Coventry to take a massive chip advantage to the final table.

It took little more than three hours to reduce the 27 players who returned on Day 3 of the record breaking GukPT Goliath down to a nine-handed final table. The chip leader when play resumes at the Ricoh Stadium in Coventry will be UK poker player Jiri Sladkovsky – who entered Day 3 in seventh position with 3.89 million chips, but who bagged up 18.025 million chips at the close of play due to three incredible hands.

Nice Start to the Day for Jiri Just Gets Better

An hour later, Sladkovsky was involved in the biggest pot of the tournament to date. More than 8 million chips were on the table when his A♠ K♦ was looking good against Peter Rhodes’ A♣ Q♥ pre-flop. However, Sladkovsky had to sweat through a flop of 8♥ 3♥ 6♥ before chipping up to become tournament leader for the first time.

Finally, Sladkovsky was responsible for eliminating tenth place finisher Ernesto Aguilar, who had moved all-in with A♥ 8♣ on a board of 9♦ Q♣ K♠ / K♦ and was snap-called by Sladkovsky (J♦ 10♦) who had flopped a straight. The 8♥ on the river sealed Aguilar´s fate and the final table of nine was set.

Second and third places on the GukPT Goliath leaderboard are held respectively by Daniel Cullen (13,380,000 chips) and Daniel Arbon (8,660,000 chips). Cullen had entered Day 3 of the GukPT Goliath with the chip lead and looked as if he was going to run away with the tournament when busting Rhys Ellis A♣ A♥ > J♣ J♠ in one of the early hands of Day 3.

Cullen was also responsible for the elimination of Khalick Mohangee in 15th place (J♣ K♠ > A♦ J♦) when flopping K♦, and finished off Peter Rhodes after Rhodes´ massive loss to Sladkovsky (above) A♥ 10♣ > Q♣ J♣. However Cullen was not winning as many large pots as Sladkovsky towards the end of the day, but will start the final table with position on the chip leader.

Daniel Arbon did well to maintain his stack throughout the three levels of play – seated as he was to the right of Sladkovsky and Cullen when the game was being played over two tables. Arbon had entered the day with 4.75 million chips, and had won a big pot early on (K♦ K♠ > 8♥ 9♠) to eliminate Marc Brazier in 20th, however was starved of action later on with the two biggest chip stacks following him in the betting.