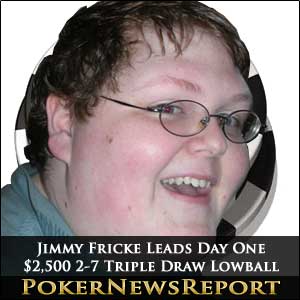 Tom ‘durrrr’ Dwan – who played in three separate events yesterday – somehow made it through day one when battling back from just 700 chips during the 10th level to sit on 11,600 in a distant 83rd place.

Meanwhile, Phil Hellmuth – who has recorded two runner-up spots at this year’s WSOP – was also sent to the rail not long after he was crippled when losing a hand to Bill Chen.

The Poker Brat is still attempting to pick up a record-setting 12th WSOP bracelet, but could not survive the opening day.