Bwin.party has announced that co-Chief Executive Officer Jim Ryan will step down from his position and retire effective Jan 15, 2013. 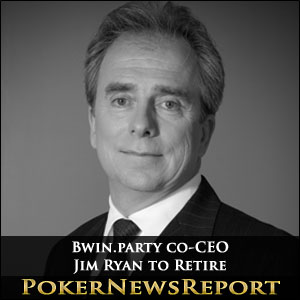 Bwin.party has announced that co-Chief Executive Officer Jim Ryan will step down from his position and retire effective Jan 15, 2013.

Ryan has shared CEO duties with Norbert Teufelberger since PartyGaming Plc merged with bwin Interactive Entertainment AG in March 2011 to become bwin.party Digital Entertainment. Prior to the merger, Ryan held the position of CEO of PartyGaming since 2008. He has worked in the gaming industry in an executive capacity for 11 years, also lending his expertise at CryptoLogic and St. Minver.

Heeding a desire to be with his family in his homeland of Canada, Ryan made the decision to leave what he called a “dream job” with bwin.party. In a bwin.party press release, Ryan stated that he is immensely proud of what we have achieved and know that with Norbert [Teufelberger] at the helm, the business is in excellent hands and is particularly well-placed for the future.

That future includes an upcoming migration of players from the bwin poker room on the Ongame Network to the company’s PartyPoker platform. Also, under the direction of the co-CEOs, bwin.party is poised to enter the U.S. online gambling market, whether the new regulations are at the state or federal level. Recent partnership agreements have been forged with the likes of Zynga, MGM, Boyd Gaming, and the United Auburn Indian tribe. Ryan and Teufelberger were instrumental in solidifying those deals, as well as introducing the bwin.party product into new European markets.

The transition to regulated markets is continuing and we are entering a period of intense product and technology innovation that will now be led by Norbert Teufelberger, whose experience, as one of the pioneers in online gaming, is probably unrivalled, said bwin.party Non-Executive Chairman Simon Duffy.

Teufelberger will assume a new role with the company next month following Ryan’s departure, that of Group CEO. He called Ryan “an excellent business partner” whose “experience, drive and vision” allowed bwin.party to excel in the gaming industry.

The Board and I would like to thank Jim for his invaluable contribution and wish him every success for the future, Duffy said, in closing.