The climax of the APPT Macau Main Event was one which will remain in the memories of anybody who witnessed the sensational victory of China´s Jiajun Liu. 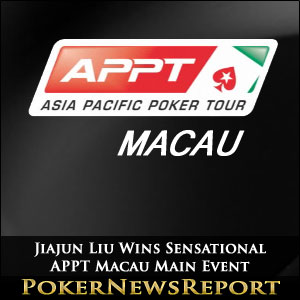 The climax of the APPT Macau Main Event was one which will remain in the memories of anybody who witnessed the sensational victory of China´s Jiajun Liu.

The PokerStars´ LIVE City of Dreams was an appropriate setting for the climax of the APPT Macau Main Event as China´s Jiajun Liu pulled off a sensational – and unlikely – win against French poker player Cyril Andre.

Both Liu and Andre had been among the chip leaders from the start of the tournament, and they entered the final table in second and third place respectively behind Scotland´s Tom McGarrity, who had flopped trip Aces in the final hand of Day of Day 3 to eliminate Feng Wen Chen in tenth place and set the nine-handed final table:

With such an imbalance of stacks between those at the top of the leaderboard and those at the bottom, it did not take long for the chips to start flying and, in the first hand of the APPT Macau final table, Yen Han Chen doubled up against Yat Wai Cheng when his pocket Kings were too good for Cheng´s pocket Tens.

A few hands later and Sailesh Verma (J♣ J♠) was the first player to depart when Tom McGarrity (A♦ 8♦) flopped an Ace to send the player from Hong Kong to the rail. Verma was soon to be followed by Yat Wai Cheng, whose K♥ 7♠ failed to improve past Cyril Andre´s A♦ 8♥ and, before the end of the first level, the final table was reduced to six players when Jean Marie Peyron´s A♠ 10♠ failed to connect with the board and was bested by Billy Argyros´ J♥ J♦.

Two More Hit the Rail as the Croc Starts to Bite

Two further quick eliminations reduced the final table to just four players – Carlos Kuo Chang ran his 9♥ 9♦ into Cyril Andre’s pocket Queens and failed to find the two-outer he needed to stay alive, and Andre was again the victor when his 10♣ 10♠ was too strong for Yen Han Chen’s A♠ 6♣ who was eliminated in fourth place.

In-between all the quick-fire carnage, Billy “The Croc” Argyros had crawled his way up the leaderboard, and – as the game went four-handed – he lucked a healthy double-up against Cyril Andre when rivering a Broadway straight. Argyros was looking to become the first player to win two APPT Main Event titles following his victory in Melbourne last year and, as the game progressed, it looked as if Argyros might just pull off the historic achievement – despite having started the final table in last place.

The Croc Rises – The Croc Falls

With his chips safely stacked from his fortunate hand against Cyril Andre, Billy Argyros then eliminated Tom McGarrity in a A♣ A♥ > A♠ K♣ monster pot that saw “The Croc” go into three-handed play with more than half the chips in play – (Argyros 5.1 million/Liu 3 million/Andre 1.72 million) – but then events started to go sour for Argyros.

Argyros missed a spade flush draw to double up Cyril Andre (K♠ J♦ > 2♠ 8♠) and was then forced off of two pots in succession by Jiajun Liu to see his stack dwindle to below two million chips. His demise ultimately came chasing a spade flush again with J♠ 3♠ on a flop of Q♠ 9♠ 5♥ and failing to find the black card he needed to overcome Andre Cyril´s A♣ A♦. The Croc was eliminated in third place, while Cyril Andre took a 5.165 million -v- 4.755 million chip advantage into the heads-up against Jiajun Liu.

Wow – What a Finale to the APPT Macau Main Event

What happened next was astonishing.

After two hours of the lead changing hands, the final hand arrived, and it was almost as incredible as the action that had preceded it. Cyril Andre moved all-in pre-flop from the button with Q♠ 8♥ and Jiajun Liu snap-called with pocket Sevens.

The flop of Q♦ Q♣ 10♣ gave Andre Trip Queens and made him an 89% to double up once again; however the 7♦ spiked on the Turn to give Liu a Full House and – after the 9♠ had been dealt on the River – the APPT Macau Main Event title.