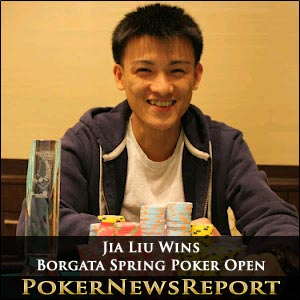 American Jia Liu has collected his biggest ever cheque, $312,483 – and in the process almost tripled his career tournament earnings – for winning the $1 million guaranteed Borgata Spring Poker Open $2,500+$200 buy-in Championship Event after outlasting a 520-player field.

Liu – who had started the 10-handed final table as chip leader – ultimately defeated New Jersey’s Larry Abrams in a heads-up battle that left the runner-up with $175,700 as a nice consolation prize.

Liu might not have had to overcome any of the world’s most famous players – with the majority in Europe, Asia and in Florida for the World Poker Tour (WPT) Seminole Hard Rock Showdown – but the Brooklyn pro still had to see off some tough competition from the likes of fellow final table players Matt Woodward, of Las Vegas, fellow New Yorker Cliff ‘JohnnyBax’ Josephy and Fort Lauderdale’s Chad Batista to win the title at the Borgata Hotel Casino & Spa.

Champion’s First Title Since End of 2009

Liu’s biggest previous cash – from career earnings before this win standing at $158,913 – came when he finished as runner-up in the $260 buy-in No-Limit Hold’em Shootout for $42,734 at the 2008 World Poker Finals in Mashantucket.

This latest title was also Liu’s first victory since November of 2009 when the American pocketed $15,708 for taking down the $300 buy-in No-Limit Hold’em US Poker Championships event in Atlantic City.

Having made the call, Abrams showed A♠ J♣ to be well ahead of Liu’s K♣ 4♦ in his pursuit of a double-up, although that all changed on the K♦ 7♠ 2♣ flop as the latter took a commanding lead.

The 6♣ turn and 7♦ on the river were not help to Abrams as Liu celebrated his biggest victory.