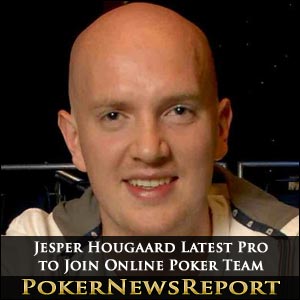 Jesper Hougaard is just the latest in a long line of pros to sign a deal with online poker websites – and should prove a quality additional to their roster following his success at the 2008 WSOP when he picked up $610,304 for winning event #36, a $1,500 buy-in No-Limit Hold’em tournament, as well as £144,218 for securing the first event, a £1,500 No-Limit Hold’em tournament, at the WSOP Europe in London the same year.

Primarily a cash game player, the Danish star has also enjoyed great success at other tournaments, most notably online at PokerStars with two Sunday Million triumphs to take his total career earnings beyond the $2 million mark.

In fact, Hougaard, who turned pro back in 2007, is just one of a handful of players to succeed twice in the PokerStars Sunday Million, although he is primarily a Pot-Limit Omaha player.

The 29-year-old former table tennis international and coach to the Danish team – who is also a co-founder of Donkr.com, the Danish department of the international poker community – said: “I’m very excited to be signed by Bet24.com and I’m sure that, with me as team captain (at) Bet24, I can be a great ambassador to make Bet24.com the leading betting company and the natural choice for poker players in Denmark after the legislation. It feels very good to be on the winning team.”

The Copenhagen-based Hougaard, with 10 cash finishes at the WSOP, will not officially join up at Bet24 until January 1 of next year, but will definitely be flying their flag at the €5,000+€300 main event at the European Poker Tour (EPT) Prague that kicks off today.