While most attention was drawn to the poker action taking place in Las Vegas, Jerry Monroe has won the IP Biloxi World Series of Poker Circuit Main Event. 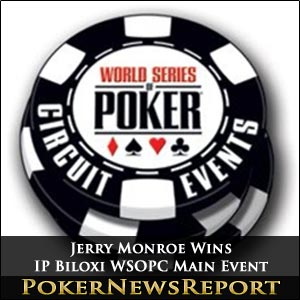 While much of the world´s attention was drawn to the poker action taking place in Las Vegas, Jerry Monroe produced an incredible performance to win the IP Biloxi World Series of Poker Circuit Main Event.

Starting the day in tenth place of the 12 remaining players, with a chip stack (300,000) that was dwarfed by overnight chip leader Jeremy Drewery (1,524,000), Jerry Monroe made great plays throughout the day and, supported by some fortune with the cards, claimed the WSOPC victory ring and first prize of $112,779.

The two players below Jerry Monroe on the leaderboard left the tournament within the first few hands – Roscoe Bennett (9♣ 9♠) running his stack of 128,000 chips into the 10♦ 10♣ of mid-stacked Chris Parsons, and Parsons again was the beneficiary when calling Richard Tucker´s 8♣ 8♦ with his own A♣ A♦ to move into second place. Meanwhile Jerry Monroe picked his slot carefully and waited until he was dealt A♣ J♥ before getting his last chips into the middle. He was called by David Williams (K♣ J♠) but was never in trouble as the board ran 4♥ Q♥ 5♥ / A♠ / A♦ to give him trip Aces.

With the field down to ten players, the two short-handed tables came together and there were instant fireworks.  Jacob Naquin, who had been hovering around 400,000 chips (Blinds 10,000/20,000) got his chips all-in with Q♦ Q♠ to double up against Jeremy Drewery, and then took the chip lead when flopping a set of fours – also against Drewery. Two players were eliminated with hands that both would have felt were winners. John Holley (A♣ 4♣) got all his chips in after the flop of 4♦ J♣ A♦, only to see Michael Nasserazad roll over J♦ J♠, while David Williams (A♠ 10♥) must have felt he made the right call against Bill Phillips (A♦ J♠) when the flop came down 10♦ 4♦ Q♦ – only for the 5♦ to be dealt on the river to complete Phillips´ flush and send Williams to the rail.

Naquin Extends His Lead but Monroe Hangs On

For a while, the WSOPC Main Event Final Table looked like it was going to turn into a one-man show. Having taken the chip lead, Jacob Naquin extended his advantage by eliminating Russell Ivey (no relation) in eighth, crippling Ronnie Sewell and busting Michael Nasserazad. Naquin almost took out Jerry Monroe (7♠ 7♥) as well when his A♦ Q♣ hit A♣ J♥ A♠ on the flop for trip Aces, but the miracle card – 7♣ – was dealt on the turn, to give Monroe a full house and keep his tournament life intact.

With his chip stack over one million chips, Jerry Monroe turned into the aggressor. First he relieved Ronnie Sewell of the rest of his stack when flopping trip Aces. He then dispatched Jeremy Drewery when his{ A♣} K♥ dominated Drewery´s A♦ 8♣ and caught a pair of Jacks on the flop to eliminate Chris Parsons (9♦ 9♣) in fourth. “Wild” Bill Phillips tamed Jacob Naquin and put himself into the Heads-Up with a turned straight against Naquin´s 9♠ 9♥, but pocket Nines proved to be the winning combination three hands into the climax of the tournament, when Bill Phillips´ A♠ Q♦ could not improve against the 9♣ 9♠ of Jerry Monroe.

337 players each paid $1,600 to create a prize fund of $490,335, with the top 37 players all picking up a cheque for their efforts. The reward for the final twelve players who survived until the last day looked like this:-