Dr. Jerry Buss, owner of the Los Angeles Lakers and a fixture at WSOP events, succumbed to cancer and passed away at the age of 80. 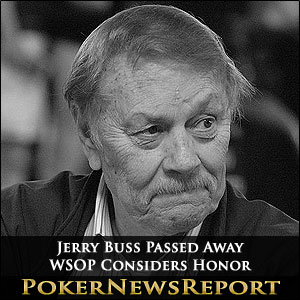 Dr. Jerry Buss, owner of the Los Angeles Lakers and a fixture at WSOP events, succumbed to cancer and passed away at the age of 80.

A long-time player at high-stakes cash games and tournaments, Buss was very well-liked within the poker community. Many players found him to be exceedingly humble and down-to-earth despite his celebrity status. At the news of his passing, many well-known pros took to Twitter to offer their condolences to the Buss family and remarked how much of a pleasure it was to be seated at the same table as him.

The WSOP is considering honoring Buss by naming a Seven-Card Stud event after him or possibly awarding a trophy enshrined with his name, according to TMZ. There is, however, no timetable as to when this might occur.

Buss was born in Utah and raised in Wyoming. He earned a Ph.D. in physical chemistry at the University of Southern California by the age of 24. Buss taught chemistry at USC and began investing in real estate in order to continue teaching. In 1979, he purchased the L.A. Lakers and enjoyed 10 NBA World Championships while owner of the club.

An official statement released by the WSOP called Buss a class act whose kindness and intelligence always stood out at the poker table.