A Welshman from London, who plays the majority of his poker in Paris, leads the WPT National in Dublin after a Day 1A in which three-quarters of the field bust. 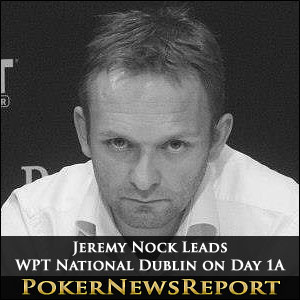 A Welshman from London, who plays the majority of his poker in Paris, leads the WPT National in Dublin after a Day 1A in which three-quarters of the field bust

The WPT National Dublin may not have the glamour of the Bahamas or prize pools to match the PCA hi-rollers, but it has captured the imagination of leading Irish poker players and tempted them to forgo the pleasures of partying in the Caribbean to participate in the WPT National Main Event. Plenty of players from Europe and the UK have also made the decision to join them and, with the likes of Andy Black and Padraig Parkinson in attendance, there is likely to be a far better atmosphere in Dublin right now than at the Atlantis Resort in Paradise Island!

The roll call of the 66 players who ponied up €1,320 to compete in Day 1A of the WPT National at the Citywest Hotel in Dublin consisted of some of the most successful names in Irish poker. IPA Tournament Player of the Year Jason Tomkins, Irish Classic winner Mark Smyth and 888 Poker´s Padraig Parkinson were all eliminated early from the Main Event and have the chance to re-enter the tournament on Day 1B, while Irish Winter Festival runner-up Noel O´Brien, Lloyd Healy (second in Dublin´s “mini” WSOP” last year) and Sean Prendiville (winner of the Celtic Poker Tour Grand Final in 2010) all take healthy chip stacks into Saturday´s Day 2.

Team Ivey Not Off to the Best Start

There they will be joined by “overseas” players from Nottingham (GUKPT winner Simon Deadman) and Birmingham (Chris Kiefert – actually now a resident of Malta), while players of the calibre of Ivey Poker-sponsored James Dempsey, UKIPT winner Paul Jackson and a certain Mr Marc Wright from Liskeard in Cornwall (who plays online as “Dean23Price” and who is fifth in the all-time list of UK and Ireland online tournament players) will unfortunately be in the queue to re-enter on Day 1B behind Messers Tomkins, Smyth and Parkinson.

It was a good day yesterday for super-satellite qualifier Jeremy Nock, who topped the chip counts at the end of Day 1A with an incredible stack of 227,200 chips. Nock, who recently ran deep in the WPT Mazagan in Morocco, has a healthy chip advantage of 69,200 chips over Noel O´Brien, with Lloyd Healey a further 27,000 chips back in third. Despite the anticipated larger field on Friday´s Day 1B, it is likely that with his substantial pile of chips in front of him, Jeremy Nock will still be leading the event when the survivors from the two Day 1s re-convene on Saturday.