Jeremie Trepanier heads the chip counts in the Full Tilt Montreal Poker Festival after an eventful Day 2 from which only eighty-four players remain. 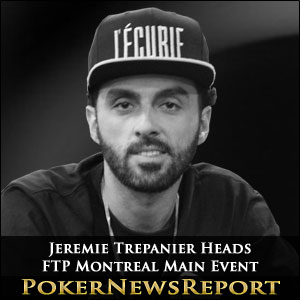 Jeremie Trepanier heads the chip counts in the Full Tilt Montreal Poker Festival after an eventful Day 2 from which only eighty-four players remain.

The Full Tilt Poker-sponsored Montreal Poker Festival Main Event really came to life yesterday as the three Day 1 fields combined. 478 survivors from the first eleven levels took their seats at the Playground Poker Club and, even though only 171 of the players were due to cash, the early action was anything other than cautious.

Within the first two levels of play almost 200 players were bust from the tournament – including FTP Ambassador Gus Hansen – but the action slowed down after four levels (now Level 17 – blinds 2,500/5,000 ante 500) as the money bubble approached with the tournament still headed by overnight chip leader Patrick St-Michel.

That´s Why They Are Called Bitches

Tarbell was bust from the Montreal Poker Festival Main Event in 172nd place and, after his elimination, the traditional short-stacked hari-kari ensued – with a further eighty-seven players falling on their proverbial swords before the close of play at the end of Level 20, including Patrick St-Michel, who bust out with Jack-high on a nine-high board against a player with pocket Queens!

Trepanier Closes the Day in Lead

The player to benefit most from the carnage going on around him was Canadian poker player Jeremie Trepanier. Trepanier broke through the million chip barrier when he was called on a huge three-bet all-in with pocket Aces. His opponent had pocket Queens (!) and Trepanier was on his way. He closed out the night with 1,789,000 chips due to flopping the nut flush in a three-way 1.3 million chip pot a little later and will be the man to catch on Day 3.

Day 3 could be a particularly short day. Play is scheduled to continue until just twenty-seven players remain and, with blinds starting at 6,000/12,000 (ante 2,000), twenty-one of the remaining eighty-four players will have less than twenty Big Blinds in front of them when they take their seats at the Playground Poker Club in Montreal.

Those for whom the early blinds should not cause any hardship include:-