Play came to a halt in the PokerStars Canada Cup yesterday when the money bubble burst – assuring the seventy-two remaining players of a CA$6,010 min-cash. 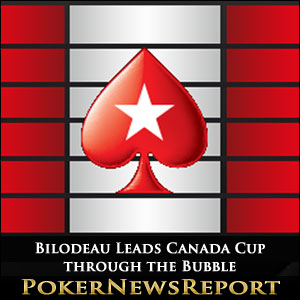 Play came to a halt in the PokerStars Canada Cup yesterday when the money bubble burst – assuring the seventy-two remaining players of a CA$6,010 min-cash.

There was a swift conclusion to Day 2 of the PokerStars Canada Cup when Tam Ho and Mario Lepine simultaneously bust out of the tournament, leaving seventy-two players remaining – each assured of a CA$6,010 minimum cash.

At the head of the leaderboard is amateur player Jeremie Bilodeau, who bagged and tagged 819,500 chips, to have a lead of eight big blinds over Rayan Chamas (776,500 chips), with Sylvain Siebert (677,000 chips) a further twenty big blinds back in third place.

With 240 players involved in the action at the start of play, Bilodeau´s ascension to chip leader went unreported, but Rayan Chamas owes his second place to a massive hero call against Danny Boyaci when, with the board showing 6♥ 5♣ 8♦ / 3♦ / 9♦, Boyaci moved all-in with A♦ J♣. Chamas tanked for a full eight minutes before making the call with 5♦ 5♠ to eliminate Boyaci from the Canada Cup just a few spots from the money.

For most of the day Jonathan Driscoll was heading affairs; and his leap to the top of the leaderboard came courtesy of a flip against Riyaz Abdulla – Driscoll´s A♣ K♦ flopping two pairs to best Abdulla´s pocket Sevens. However, the most sensational hand of the day concerned the elimination of Jean-Philippe Piquet and Maxime Laberge.

Laberge (J♥ J♠) had shoved over the top of a Chang Hwan Sohn (6♣ 6♠) pre-flop raise, and Jean-Philippe Piquet (A♥ A♦) moved over the top of Laberge´s all-in bet. Sohn considered his position for a moment and called with enough chips to cover both players. The flop (2♥ 3♦ 5♣) and Turn (7♠) were good for Piquet´s Aces, but the 6♦ spiked on the River to eliminate both Piquet and Laberge, and enable Sohn to finish the night with 304,000 chips.

Behind the three big chip stacks, a series of notable players are still in contention for the CA$366,660 first prize including Marc-Andre Ladouceur (301,000 chips), Steven Silverman (309,000) and Jonathan Duhamel (240,000 chips), while Antonio Esfandiari sits a little under the average chip stack with 158,500 chips.

The day was not so good for some other big names – Yann Dion in particular, who was keen to get his chips into the middle with Q♠ Q♥ against Thiago Nashijima´s K♥ Q♣, but not so happy when the K♦ was dealt on the flop to send Dion to the rail. Kevin MacPhee also had a nightmare, and was eliminated from the Canada Cup when his K♥ J♥ missed its flush draw and overpair against an opponent´s pocket Nines.

Incredibly for a PokerStars-sponsored event, the Canada Cup Main Event fell some way short of its CA$2 million guarantee. Over three opening flights there were just 578 entries and re-entries for the CA$3,000 + CA$300 tournament – meaning that PokerStars will lose their rake and still have to contribute almost CA$100,000 to the prize pool.

That is unlikely to worry the chipleaders, who will start Day 3 of the Canada Cup with 23 minutes remaining in Level 17 (2,500/5,000 – ante 500) before the levels are extended to 90 minutes in length. Play is scheduled to continue until twenty-seven players remain, at which point each will be assured of a CA$12,990 cash.