The male-dominated and sometimes too serious world of poker might just be about to lose some of its glamour and fun – if Jennifer Tilly follows through with her hinted-at suggestion that she is ready to quit the game. 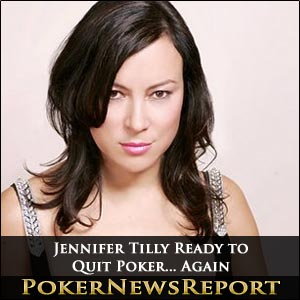 The male-dominated and sometimes too serious world of poker might just be about to lose some of its glamour and fun – if Jennifer Tilly follows through with her hinted-at suggestion that she is ready to quit the game.

Jennifer Tilly has struggled in recent years to record any significant successes, but the 2005 World Series of Poker (WSOP) Ladies’ No-Limit Hold’em champion has a long and distinguished career behind her.

The Oscar-nominated actress picked up $158,625 and a gold bracelet by outlasting 600 other entrants six years ago in Las Vegas, and then followed up that victory less than three months later on September 1, 2005, with success at the third World Poker Tour (WPT) Ladies’ Invitational Tournament at the Bicycle Casino in Los Angeles.

But it appears the 53-year-old is tired of battling away at the world’s casinos, if her appearance and announcement on The Late Show this week is anything to go by.

While chatting with the CBS show’s host Craig Ferguson – or Bing Hitler, as many Brits will remember the Scottish comedian as – Tilly implied that the strain of regularly travelling the world to play poker may be getting too much for her.

In what may have been a half-joke, Tilly pointed out that she finds poker to be “an ongoing session of never-ending agony,” before hinting that she is poised to leave the game to her boyfriend, Phil ‘The Unabomber’ Laak, whom she first met while playing in the Ladies’ Invitational Tournament six years ago.

Of course, this is not the first time Tilly has ‘retired’ from poker. Back in December of 2008, she announced her retirement from the circuit while penning her monthly column for Bluff Magazine.

She then wrote: “I love poker but greatness in poker is an elusive dream. There are too many variants. Trying to find validation in poker is like trying to find a virgin in a whorehouse. I’m not giving up poker entirely – gambling is an addiction after all. I’m just going to treat it more like a hobby and less like a career.”

However, Tilly did resume her poker career in early 2010, although it again appears that she is ready to leave the game behind.

While many poker pros and commentators have criticised Tilly for some of her decision-making over the years, it cannot be denied that, as well as her obvious beauty, she has brought some much-needed humour and excitement to the game.

It would most certainly be a shame if she were to quit for good as her sense of fun and obvious enjoyment of poker have brightened up many tournaments over the years.

With any luck, Tilly will still be a regular on the poker circuit and television shows in the future.

However, if her decision is final, I for one will certainly miss her. Good luck, Jennifer, whatever you decide to do…