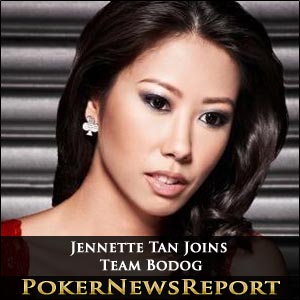 It can be no coincidence that Tan – who picked up $40,622 for finishing fifth in late February’s HK$10,120 buy-in No-Limit Hold’em Red Dragon event at the Macau Poker Cup – has been signed up just as Bodog launch their Chinese language poker room, Bodog88.

The 23-year-old was thrilled to join the line-up, saying that “it’s great they chose me” to become the third member alongside Pasalic and Ng as she believes Bodog is “an exciting brand and I’m excited to have this opportunity”. Tan also stated emphatically that Bodog “are a fun brand and I love having fun playing poker and living the lifestyle that goes with being a Bodog Poker Pro”.

The newest Team Bodog recruit reckons the poker room is entering the Asian market at just the right time, stating that she believes “Bodog88 also seem to really understand the Asian market…poker is relatively new to Asia, where mahjong is still king, and I hear Bodog88 will have that online very soon”.

Tan is also impressed by Bodog’s willingness to offer the more unusual games, including mahjong, adding that she has “never seen anybody else” provide Super Six bacarat “online before either” – which she believes will be a winner in Asia as this game “is huge in the Macau casinos right now”.

Tan is certainly already a huge star in Asia, enjoying great success in Macau, so this can only be good news for Bodog as they aim to gain a chunk of the developing market in the East.

She is undoubtedly delighted to be joining Team Bodog, saying that she believes their “brand is all about having a good time and they are never afraid to take on the establishment and I like to think that’s me, too”.

The beautiful poker pro – who was born in Los Angeles, although many people think she is Australian – speaks three languages and definitely knows how to stimulate the imagination of every red-blooded male out there by admitting that she frequently dreams “about getting leathered up, straddling a Ducati Monster and heading out on to the race track”…once she has taken down her first major title. Phew!

Tan left the USA, though, to begin a career in banking with American investment banking and securities firm Goldman Sachs in Hong Kong not long after completing her masters degree in business.

It was while in Hong Kong that Tan discovered poker – being inspired to take up the game after seeing Canadian Team PokerStars Pro Daniel Negreanu star in a televised tournament.

In fact, her recent results are pretty impressive, with Tan starting 2012 off with two fine finishes at the Lisboa Hotel & Casino in Macau – her second place in the HK$4,500 buy-in No-Limit Hold’em KO Bounty event for $15,475 coming the day before her fifth place in the Red Dragon tournament.

Her seven live tournament cashes have all arrived in the past year, with Tan recording her first in-the-money finish – 18th for $3,213 – almost a year ago to the day in the HK$2,200 buy-in No-Limit Hold’em Macau Millions.

Tan has amassed a total of $68,612 from her live event cashes – having also picked up $4,760 for taking the runner-up spot in the Asian Poker King Tournament Second Chance event in Macau during April of last year, $764 for her second place finish in last year’s HK$1,000 buy-in No-Limit Hold’em Ladies Event of the Macau Poker Cup October Special, and $1,490 for exiting in 19th at the HK$5,400 buy-in No-Limit Hold’em event at the Asia Pacific Poker Tour (APPT) Macau stop in late November.

The newest Team Bodog member – who already enjoys zooming about the streets of Hong Kong on her Honda VFR400 motorbike – reiterated her belief that Bodog has “a real understanding” of Asia, before adding that, although the poker room’s “product is really wild and the anonymous tables have caused a lot of controversy”, there is no doubt in her mind that “Asians will love it”.

Tan believes that, as many Asians “are new to the game”, they would prefer not “to be beaten by players who are unfairly using their own playing data against them”.

Meanwhile, Bodog Poker Network vice-president Jonas Odman added that, as “we have only just launched poker on the (Bodog88) site”, it is their strong belief that, “while still a niche product in the region, the Bodog Poker Network version we have will be more popular than conventional European poker rooms”.

Odman is also convinced that, “in the same way Asian players prefer live dealer online casinos to the more normal RNG (random number generator) ones in Europe, we believe Asians will prefer the protection from sharks that the anonymous tables offer them”.

But, of course, the big news was the signing of Tan, with Odman stating that, “with Jay as the face of the brand, we can take things a step further as she is a trusted and likeable ambassador for us – she can also play a mean game of poker!”

Tan joins established Team Bodog members Ng, of Canada, and Bosnia and Herzegovina beauty Pasalic to make up the most glamorous team around.

Canadian 36-year-old Ng – who became a professional poker dealer aged just 17 – now lives in Las Vegas, having moved from her home city of Toronto, while London-based 27-year-old TV presenter and poker pro Pasalic is also a well educated young woman, having gained a degree in PR management and TV hosting.