Jen-Yue Chiang has pocketed £10,160 for winning the Fox Poker Club’s May main event at the famous London venue after outlasting 145 other competitors. 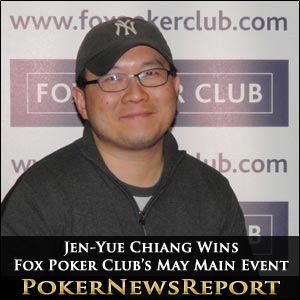 American Jen-Yue Chiang has pocketed £10,160 for winning the Fox Poker Club’s £300+£30 buy-in No-Limit Hold’em May main event at the famous London venue after outlasting 145 other competitors.

The London-based Chiang finally took down a Fox Poker Club monthly title after having made five previous final tables in the British capital city – defeating England’s George Achillea in a heads-up clash that took just six hands to complete.

The Shaftesbury Avenue venue only recently announced that they are offering a total guaranteed prize pool of at least £200,000 for the events running this month, with £25,000 set aside for the tournament won by Chiang.

However, with so many players meeting the buy-in for the two-day tournament, that prize pool hit £43,800 to ensure that the top 15 finishers made the money – all the way down to American Michael Conway, who left with £770.

‘Joy of Six’ for American

It was the ‘joy of six’ for 36-year-old Chiang after his pocket jacks held against Achillea’s king-high to at long last give him a Fox crown after coming so close on five occasions.

But Chiang didn’t have an easy path to glory, having to fight back from being the short stack when the money bubble burst, before then taking control of the final table by securing several knockouts – including those of Frenchman Frederick Gautrin in ninth for £1,100, Adolf Ventel in eighth for £1,310 and Belgian Kenny Hallaert in seventh place for £1,750.

Chiang – who is originally from Arizona – entered his heads-up battle with Achillea holding more than two-thirds of the chips after the American had eliminated Krysztof Jaromin in third place for £7,500 following a deal that also meant second place picked up the same amount.

That hand saw Jaromin move all-in pre-flop while holding A♣ J♦ and Chiang call with the dominating Q♣ Q♦ to see a flop of 5♠ 7♦ 9♥. That changed nothing as the American stayed ahead, while the K♥ turn and 8♠ river were also no help to Jaromin as Chiang secured another knockout.

Chiang and Achillea passed the blinds back and forth several times before the final hand arrived. On the button, Achillea pushed all-in with K♦ 3♥ to be called by Chiang, who revealed J♣ J♦.

The flop came A♥ 8♥ 6♣ to leave Achillea in even greater trouble. The 8♦ turn and 9♣ river were also no good to the Englishman as Chiang’s jacks held for the title and top prize.

But the winner might face a bona fide celebrity in next month’s main event, if rumours are to be believed.

This strange – and somewhat unbelievable rumour – has started in London after the Fox Poker Club moved next month’s main event from the original date of June 2 to the ninth.

So, what is this weird and wonderful claim? Well, with the Queen’s Diamond Jubilee celebrations slated to take place around the weekend of June 2, speculation suggests that Her Majesty has stated she would like to play in next month’s main event!

Of course, the Fox Poker Club immediately altered the dates to accommodate the Queen – although we at Poker News Report are still to be convinced that these changes have anything at all to do with a royal request.