American Jeffrey Manza leads going into the final day of the $1,500 buy-in No-Limit Hold’em event #38 at the World Series of Poker (WSOP) in Las Vegas. 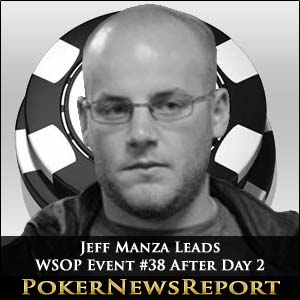 American Jeffrey Manza leads going into the final day of the $1,500 buy-in No-Limit Hold’em event #38 at the World Series of Poker (WSOP) in Las Vegas.

Illinois’ Manza enjoyed a fantastic Day 2 of this tournament to bag up with 1,302,000 chips and hold a small lead over second placed Dung Nguyen (1,273,000), of Kansas, as the only players to break through the one million-chip barrier at the Rio All-Suite Hotel & Casino.

Just 277 players started the second day after Day 1 saw the field hacked back from its original 2,534 entrants, who created a $3,420,900 prize pool with $607,200 going to the winner. That was just seven places short of the money, but the bubble was burst quickly as four players crashed out, including Steven Silverman, Kyle Burnside and Matias Nilsson.

New York State’s Matthew Pierce led once the field had been cut back to 27, but was overtaken by Manza – who is looking for his first gold bracelet – and Nguyen to end the day in third place on 804,000 chips.

One of the critical hands for Manza saw him land a one-outer to send angry Israeli Ilan Boujenah to the rail in 44th place for $11,563. Boujenah – who has over $1 million in live tournament earnings – and Manza had made it to the river on a 3♥ 8♠ 3♦ 4♣ 9♥ board, with the latter having put the former all-in. Boujenah eventually made the call to see his pocket tens beaten by Manza’s nines after he rivered a full house.

Another player at the table informed Boujenah that he had folded a nine, the Jerusalem-based pro stormed off after throwing his chips across the table. It’s not what we want to see at the WSOP, of course, but his reaction was just about understandable.

Vegas-based Scott Clements will also return today in 16th place on 325,000 chips as he chases his third gold bracelet, while fourth placed Blair Hinkle (fourth on 750,000), of Missouri, is eyeing up his second series victory, and David Pham (ninth on 508,000) will look to claim his third.