Jeff Madsen might be in line for a late birthday present after making the final 12 of event #14 at the World Series of Poker (WSOP) in Las Vegas. 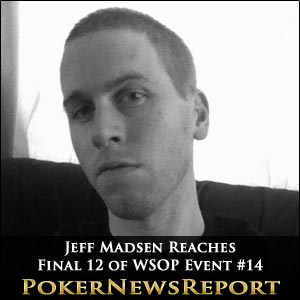 Jeff Madsen might be in line for a late birthday present after making the final 12 of event #14 at the World Series of Poker (WSOP) in Las Vegas.

The Vegas-based pro celebrated his 27th birthday yesterday by outlasting ‘The Table of Death’ – which included Ben Jenkins, Joe Cada, Randal Flowers, David ‘Doc’ Sands, Tom Schneider and Lauren Kling – in the $1,500 buy-in No-Limit Hold’em Shootout to book his place in the third and final day as he eyes up the $311,174 top prize and gold bracelet.

A total of 1,138 players started the event, but just 120 survived into Day 2 – all of who had made the money when play started in the Amazon Room at the Rio.

However, it was Madsen who had the toughest task when trying to survive the day, but he ran well while also playing some great poker to ensure that he is in with a shout of the top cash from a $1,536,300 prize pool.

Madsen’s major moment arrived when he eliminated the dangerous Sands, of Vegas, in 46th for $5,295. Sands had only just suffered a bad beat to become short stacked and shoved all-in with queen-jack, only for Madsen’s pocket aces to stay ahead for the knockout.

The Amazon Room will again host this event, with the surviving dozen returning today, when they will play at two tables until only 10 players remain. They will then gather at one table in the Pavilion room to play down to a winner.

Here is how they players will line up: