Jeff Lisandro has won his fifth World Series of Poker bracelet after defeating Joe Serock heads-up in Event 2 of the 2010 WSOPE, a £5,000 Pot-Limit Omaha tournament which attracted 120 players to create a prize pool of £600,000… 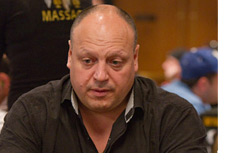 Jeff Lisandro has won his fifth World Series of Poker bracelet after defeating Joe Serock heads-up in Event 2 of the 2010 WSOPE, a £5,000 Pot-Limit Omaha tournament which attracted 120 players to create a prize pool of £600,000 with Lisandro collecting £159,514 for the victory. The win takes the 2009 WSOP Player of the Year to 12th on the All-Time WSOP bracelet list and brings his lifetime tournament earnings to $4,491,414.

The final day of the event began with 15 players remaining in contention all with their eyes firmly set on winning the bracelet but it was quickly down to a final table which featured Lisandro, Jeff Kimber, Joe Serock, Felipe Ramos who is a PartyPoker Pro, Karl Mahrenholz who is a member of the Hit Squad, 2006 WSOP Player of the Year Jeff Madsen and 2010 WSOP November Niner John Racener. The final table also featured Willie Tann and Chris Bjorin who also made the final table of Event 1 where Phil Laak won his first bracelet.

By the time the action was down to three-handed it was Lisandro, Serock and Tann who were left chasing the bracelet. Serock was the chip leader at this point with over 1million while Lisandro and Tann were both around the 500-600,000 mark. Serock let the pair battle it out and soon Lisandro busted Tann’s Kings to eliminate him in third place for £71,184 and leaving him and Serock heads-up.

The action was exciting from the beginning because early on the players were all-in with Serock holding AJQ10 as Lisandro held A10104 and it ended with both the hand being chopped because both players held a broadway straight. On the final hand Serock seemed in control with his Pocket Aces however Lisandro held Pocket Kings and was able to find a third King giving him a set and the victory.