The action at the World Poker Tour Foxwoods restarted again at noon today and all six players who headed to their seats shared the same dream, winning the tournament and the title that came with it but it was Jeff Forrest… 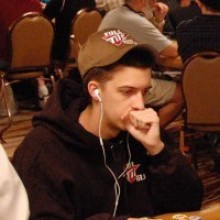 The action at the World Poker Tour Foxwoods restarted again at noon today and all six players who headed to their seats shared the same dream, winning the tournament and the title that came with it.

The action began and the action seemed to sway in almost every players favour, all getting the excitement that came with going on a winning streak.

Mohsin Charania was the first player to experience the feeling of losing the majority of his chips, taking his AQ into a six figure pot against Nikolai Yakovenko’s A2, seeing his middle stack wither away to see him taking the short stack title for a while.

Finally looking down at pocket sevens, Charania tried to change his fortunes, moving all in but getting a call from Keven Stammen who turned over pocket eights, leaving Charania in a bad way entering into the community cards which offered no help and saw him sent to the rails in 6th place.

After beating Charania in his moment of desperation, Stammen was the next to fall after seeing his A10 run into the AQ of Dave Inselberg and joined his earlier victim at the rails after being sent out of the tournament.

Winning the hand against Stammen, Inselberg collected a chip count of over 1,000,000 chips and his stack growth didn’t stop there as he continued to case problems at the table by eliminating the next player, Nikolai Yakovenko.

Entering into the hand with his K8 in hand, his thoughts turned sour as Yakovenko turned over his pocket aces pre-flop, only for lady luck to give him the benefit of the hand after the community cards gave Inselberg two pairs.

The community cards failed to empower Yakovenko’s hand and he was sent to the cashier’s desk to collect the 4th place payout.

Down to the final 3 players in the tournament, the action began to really liven up, the remaining trio taking it in turns to double up against each other as all players seemed to eliminate anyone and everyone they could.

The fast paced action soon became too much for Thomas Marchese after running into a shortage of chips and choosing the wrong time to push all in over the top of a Jeff Forrest raise.

Forrest called and turned over K6, the sight of the hand was exciting for desperate Marchese as he had to reveal that he had tried to make a recovery from his poor situation with his AK.

The flop was revealed and it showed very little in the way of power for Marchese, instead offering up a 6 which gave Forrest the lead with a pair of sixes which turned out too strong for the AK and sealed Marchese’s participation in the tournament, finishing in 3rd place.

Having won the hand, Forrest headed into the heads up section of the tournament with a strong chip lead and with such a big advantage over Inselberg, it took Forrest only ten hands before he was able to eliminate his final opponent.

Trying to slow play his opponent in the final hand, Forrest simply waited for Inselberg to make his move before he pushed all in with a pair of queens, acting as an over pair to what was available on the board.

With his queens holding up against the 69 of Inselberg, 22 year old American Forrest won his first ever liver poker tournament, cashing out with $548,752 and the WPT title.

Jeff Forrest was representing Full Tilt Poker at the final table however if you are a beginner poker player you should play at betting sites with online poker games where you will find the games are much easier.