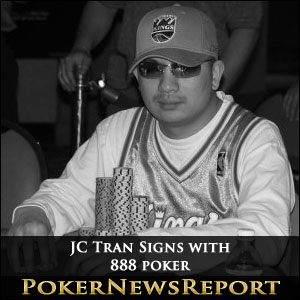 In what’s shaping up to be the best year of his poker career, 36-year-old JC Tran is out to prove that you don’t have to be in your early 20s to dominate the poker scene. His good fortune continued on Sunday, when 888poker announced that he will be joining Team 888Poker. This means that Tran, along with fellow November Niners Jay Farber and Michiel Brummelhuis, will be brandishing 888poker gear at this year’s final table. Other Team 888poker members include last year’s Octoniners Jesse Sylvia and Russell “RunGoodRussell” Thomas.

Tran went on record stating, I am extremely excited to work with 888poker and looking forward to a great experience. Although Tran will not be playing in many live events before November, he will represent 888poker at the upcoming WSOP Europe. Tran is currently registered in the Seminole Hard Rock’s inaugural WPT Alpha8 super high roller event.

JC boasts an impressive poker resume. He is a two-time WSOP bracelet winner and a WPT champion. However, his last bracelet win came in 2009 ($2,500 Pot Limit Omaha) and he hasn’t won a major title since that time. At this year’s WSOP Tran would cash in seven preliminary events, but would fail to reach a final table. However, thanks to his superb play in the Main Event, Tran is guaranteed at least a ninth place finish, good for $733,224. But as the current chip leader, Tran hopes for much more, and will likely not be satisfied unless he wins the whole thing.

Tran is a native of Vietnam and currently resides in Sacramento, California. He was part of the first waves of poker pros to make headlines in the tournament scene. To date he has amassed a whopping $8.3 million in career tournament earning; an amount he could virtually double by winning the Main Event.

888poker was launched in 2002, making it one of the oldest online poker networks in the world. Although not the largest online poker site, 888poker is known as one of the most reputable. It has won several awards, including Best Gaming Product of 2012 and Best Poker Operator of the Year in 2011. Recently, 888poker made the decision to eliminate no-limit heads up cash tables from its available offerings.